The Ice Warriors, animated episodes, and me 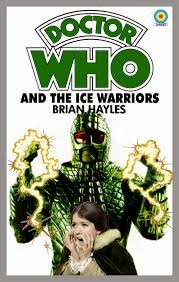 So recently I picked up the Ice Warriors dvd, happy to have a Troughton story I had not seen before. Even better, it was the first appearance of the the title monsters! The story was good, but tended to drag a bit in places, but I discovered something about myself. I am not a fan of the animated episodes. I much prefer to see the actual actors, to watch their expressions and their little idiosyncrasies. This is not to say I do not appreciate them. To be able to watch the entire story is great, and the animation is preferable to the still photos found in the recons.

Enough about the animation, back to the story. The ice warriors leader, Varga (played by Bernard Bresslaw) is impressive, though when he hisses it sounds like laughter. Also, I did not know the original mask was a single piece as opposed to the later design where there is an appliance covering the mouth/chin and the helmet. Set design are decent, costumes look good though the visors/glasses that go over the head instead of around like regular glasses. All in all, it was decent. I think it could have been a four or maybe five part story as opposed to the full six parts. Enough for now, later guys!