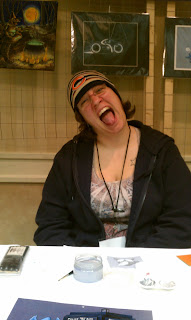 Meg Lyman: artist, engineer, and all around amazing woman. I first met Meg in 2003 at Andy Hopp's first artist retreat, which eventually become Con on the Cob. She has really polished her unique style and expanded into different mediums, culminating into participation in Larry Elmore's legendary painting class this past year! Now, let us ask some questions, shall we?
Is it true you have an engineering degree?
Why yes, that is true. Two, actually. They help with my "real" job. I used to work on airplane engines but now work on gas turbines for electricity generation.


What first triggered your love of art?
It was always just there. I've drawn things that don't exist for as long as I could hold a blunt instrument. However, seeing the work of Ursula Vernon finally inspired me to start painting in 2005, and my earlier stuff has a lot of her influence in it.


Which artist/creator do you admire most and why?
See above, for whimsy and imagination. Also, all my fellow Con on the Cob-type artists, who consistently make an effort to share things they've learned and encourage other artists. For classics, my favorites are Velazquez and Dali.


You draw a lot of octopi, is that your favorite animal?
How could you tell? :) I love cuttlefish, too.


Your blog (@http://www.crashoctopus.com/ ) deals with art and beer, really? What is your favorite beer?
I love dark, sweet beers. A favorite is Terrapin Wake 'n' Bake. Also, Southern Tier Creme Brulee Stout, which is a winter seasonal.


What is your favorite medium to work in, also have you tried sculpting?
Gouache! It's a coarser, opaque cousin of watercolors. I am doing more oil paint now as well. I have made a few 3D things, but I really want to focus on learning my current media before I go willy-nilly trying everything. It's hard to suppress the urge.


Do you play any board/card/role-playing games?
Not really. My husband does a lot, so I am quite familiar with it... but my nerdiness manifests itself in other ways.


How did you first manage to get mixed up with Andy Hopp?
A friend found him on the internet and hooked us up through the Wanderers Guild. It was the first time I realized there were art nerds out there. I wasn't alone!


Any upcoming projects we should look out for?
Next year promises to have some changes for the better! I'm looking to keep up the cephalopods, but branch more into other, less cartoony topics. But still whimsical! I love making people laugh.


Is your art site (@http://www.meglyman.com/ ) all set up, can people at least come and buy your wonderful stuff?
It's mostly functional, but it needs an overhaul. The store is glitchy, so I do all my sales through e-mail/Paypal or in person.

When you arrived at that first artist weekend, you had a broken leg and had been in an accident with a deer on your way there. Is it true that you ate that deer's heart to gain its power?

Oh the holidays, a time for families and friends to get together. Well, mostly families, I understand that, which is why I have moved my game, so I can get everyone together at least once before the end of the year. It is a little discouraging, but I remind myself that some folks do not have a group that they can play with at least once a month. Part of my desire to play with the full group before the new year is one of them will be unavailable for a few weeks afterwards.

So with all of this prepping for my Deadlands game, I am sticking with my plan of returning to Dungeons and Dragons afterwards. I have just one or two plot threads in mind, so once the players have taken care of business we will return to the campaign

On the World of Warcraft side of things, I am enjoying it but my altaholic tendencies are catching up with me. I find myself running different characters around repeating various cooking quests in order to get the various cooking achievements. No wonder I get hungry when I play! On the positive side I always have a toon for whatever mood I am in, so that is nice.

So, have any of you been stymied by the holidays? Gaming plans falling through? Let me know, leave a comment!
Posted by Jim Yoder at 11:02 AM No comments:

I was checking outhttp://theinstance.net/ like I do, and was happily surprised to see that I could watch a World of Warcraft documentary, WooHoo! Specifically, Race to World First, which I have been hearing so much about, especially on The Instance WoW podcast.

Race to World First is a documentary about various World of Warcraft guilds around the globe competing to be the first to complete the initial set of raids in Cataclysm. Currently you can watch it for free through their website http://www.racetoworldfirst.com/ and I recommend viewing it if you like competitive gaming or if you are curious what this is all about. It deals mainly with two guilds, Blood Legion and Paragon, as well as some others such as Method, Adept, Ensignia, etc. You get to witness their struggle as they work with each other to be the best, and tempers flare. Their is no drama without conflict, and you also learn about these people and it is just a great thing. I really recommend it, especially since it is free at the moment.

I love the end, where the co-hosts of the instance decide they are going to group up and do a raid, it just sounds like an invitation to come into the world and have fun, it is not all serious, and who knows, you may learn something too!

PS. I also highly endorse The Instance podcast if you are or thinking of getting into WoW, it is a great show with wonderful personalities whom I really enjoy.
Posted by Jim Yoder at 11:12 AM No comments: