Made a trip to the bigger of the two local used bookshops, and could not resist finishing off my Fritz Leiber books. Also found Jack Vance's Eyes of the Overworld, woot!

Just finished the Fafhrd and Gray Mouser book Swords and Ice Magic last night, what a read! The climax was fantastic, with lasting consequences for the duo. I enjoy when there is a bit of continuity in a series (too much can be obstructive, just ask Marvel and DC) and Leiber threw references to their past experiences, but not to the point of losing a reader who had skipped some stories.

In terms of things to use at the game table, there seems to be different types of will o the wisps. It could be something to stat up for a session to make things interesting.

I am thinking that the next book I read will be Burroughs Tarzan of the Apes, mainly to get a feel for a jungle setting that I can use for a region I am working on for a game. Plus, somehow I have never read any Tarzan, so there you go. Please leave a comment and let me know what you think, have you read any of these stories? Any opinions about them?
Posted by Jim Yoder at 7:42 PM 2 comments:

My current book is Swords and Ice Magic, the sixth Fafhrd and Grey Mouser book. I have read the first book and part of the second, but a part of me decided to just go ahead and read this one. 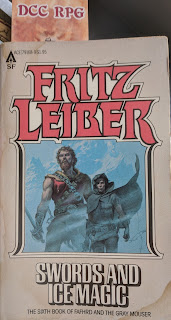 It starts off with a short (fourteen pages I think) story involving Death with each subsequent story getting longer. It is all to set up what comes later, as all good stories should. I am midway through the next to last story and it really seems to have built up to some serious shenanigans and skulduggery.

I'm wondering what I should follow it up with, any thoughts? Until next time, take care!
Posted by Jim Yoder at 1:10 PM No comments:

So I recently jumped back into reading Appendix N literature, since I have a backlog of books I own but have not read. Her is what I think of Lord Dunsany's King of Elfland's Daughter, published in 1924. What a read! The style of prose was a change of pace, along with the use of vocabulary that was refreshing. I have read of HP Lovecraft singing his praises, stating his dream cycle stories were Dunsanian. There is a faerie tale quality that is a break from the hack and slash of Howard or action adventure of Burroughs. If you have a chance to read this, and you want something a bit different, give it a shot. I have one other of his books, but decided to read something different. 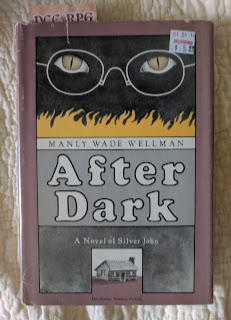 Good ole Manly Wade Wellman! This is the second Wellman novel (Also the second Silver John) that I have read, the first being The Hanging Stones (published in 1984. After Dark, published in 1980, was a bit more confrontational than I recall Hanging Stones to be. It has John and his friends confronting and ancient race that wants to subvert humanity. Silver John uses his knowledge of folk lore and a book called The Long Lost Friend to great effect. Once you get used to the way characters speak, ie nair is never, hair is hear, hark is to call out, the pages zip along. Well worth searching used bookstores or even the internet.
Posted by Jim Yoder at 3:20 PM No comments: