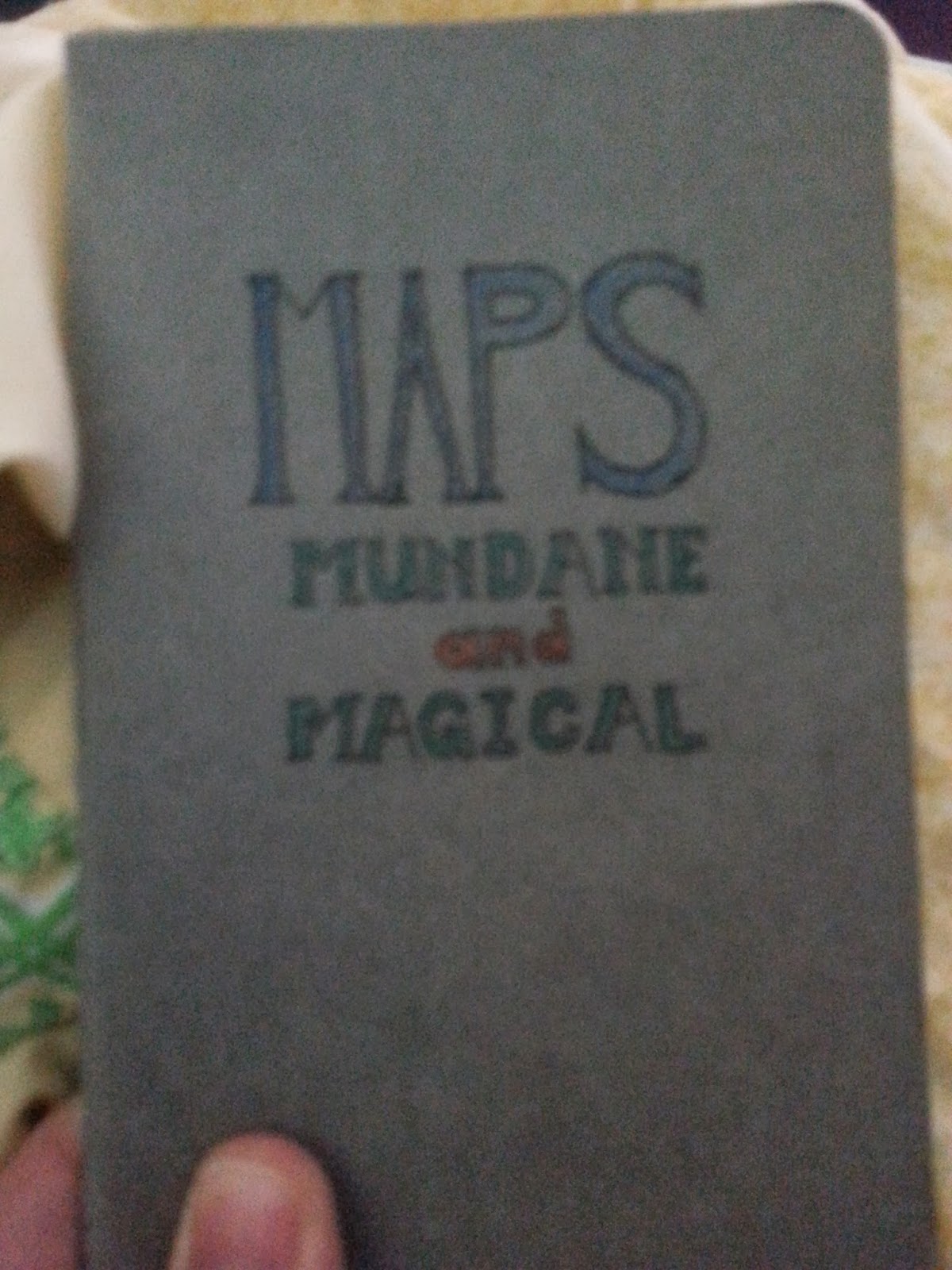 Recently I picked up some graph paper moleskine, and have been working out some maps. Through March, Monday Wednesday and Friday I will post a new map. I am really looking forward to this, and I hope you guys enjoy it as well.

Sunday, March 16th at 1:00 I will be running a Labyrinth Lord game (b/x D&D retro clone) It will be held at Ravenstone Games, 1675 Karl Ct. Columbus, Ohio. Unlike my previous two games, I have people signed up for this, but there is room for more. Putting the finishing touches on the adventure, rumor table encounters. Really excited about it! Come on in and check it out! 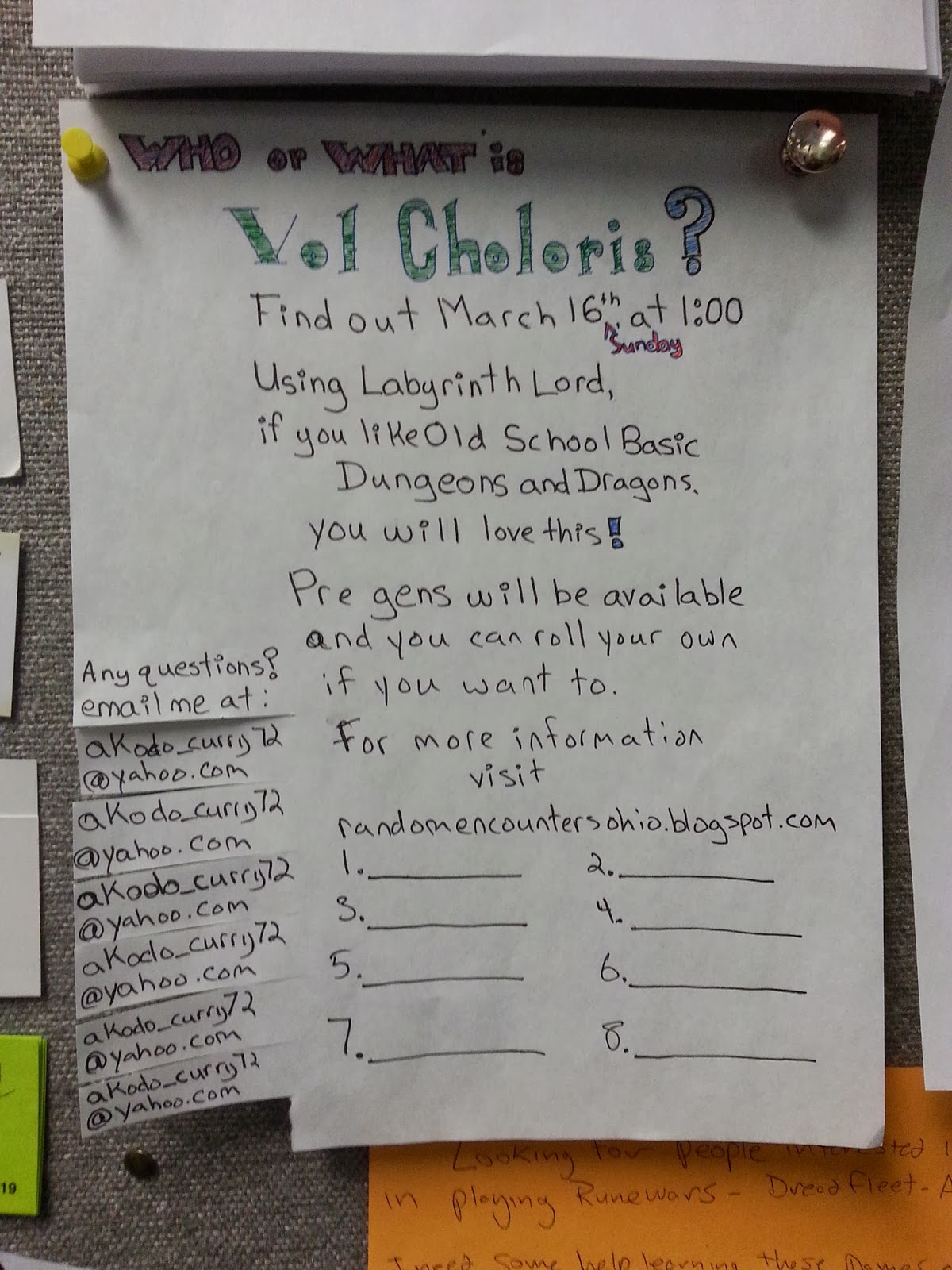 I am especially fond of this sign up sheet.

Lately I have been busy with work and the crazy weather around here. I have been able to watch some weird movies that I discovered through a site that lists some Lovecraftian movies. I was not able to watch all of the movies there, and some I had already seen, but it seems like a pretty good representation. So, here we go. No spoilers, just my impressions:

First on the list is Absentia, starring Katie Parker and Courtney Bell. Starts off slow, with some little scares and building up to the climax. Creepy and beneath the surface of the "normal" world, totally Lovecraft. The location could be anywhere, we have all heard of places that are bad, that no one should go near, well here you go. 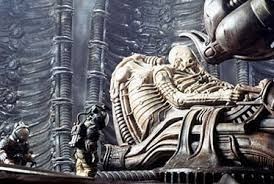 Alien from '79, Cthulhu in space. This one I could skip since I had already seen it. Regular people go to investigate something and end up regretting it. The design elements are amazing, H.R. Geiger is brilliant, and the acting is fabulous. 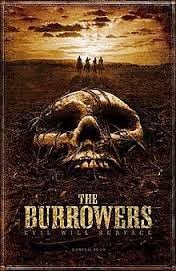 The Burrowers is like an old west Lurking Fear, I watched this one a few years back. Pretty good set up, main character's fiance is kidnapped so a posse is formed to get her back, but what if it wasn't the natives who took her? Clancy Brown is great in here, the things in the tall grass are super creepy. 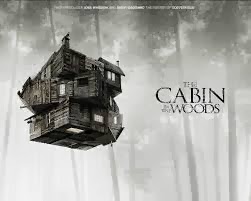 Last year I saw Cabin in the Woods. It starts off looking like one thing and ends up being something else. All of the talk you have heard about this movie is true, not just Whedon fans talking it up. 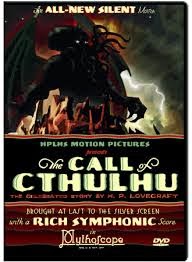 Of course, Call of Cthulhu by HP. Lovecraft historical society makes this list. IT IS AMAZING! Very faithful to the source material. 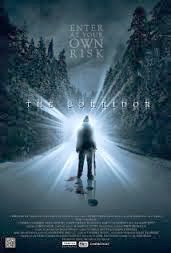 The Corridor has the alien influence, other world just next to ours, idea down pretty good. Like Absentia it starts off slow and builds, though I preferred this climax to the the previous film. There is more closure at the end than in Absentia. Something lies waiting for us, to manipulate us like dolls. 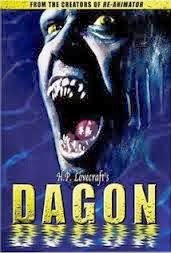 So we come to Dagon, which has almost nothing to do with the Lovecraft story of that name. It is Shadow over Innsmouth set in a small Spanish town instead of a New England one. I feel they did an excellent job bringing the tale to life. 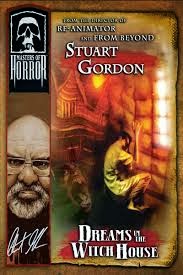 Part of the Masters of Horror series, Stuart Gordon returns to what he has done well in the past, transferring Lovecraft to cinema. For the most part it is faithful to the material, with some nudity thrown in. 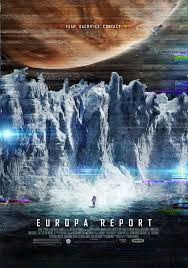 Europa Report brings us back into space, though a little closer to home with a documentary style film. The crew of a rocket (?) is headed to Europa, one of the moons of Jupiter, to investigate whether there is life in the water beneath it's icy crust. It starts off letting you know that they lost contact with the crew and then spend the rest of the movie filling you in and building up to what I feel is a great ending. Well, great for this type of film. 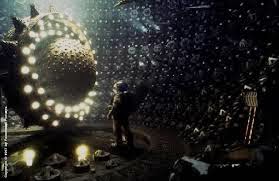 Event Horizon gives us a mix of body horror and existential insignificance. I have not seen it since it first came out but I do remember it's surreal creepiness. 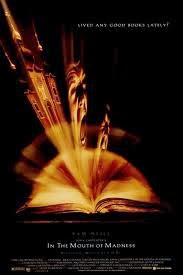 Same Neill again, this time I guess I was expecting a lot since I came away a little disappointed. It had it's moments though, and the idea that we  are helpless in the face of a greater controlling force was there. 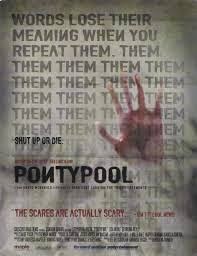 This is one of my favorites from the list, at least of the ones I had never heard of before. The idea at work here really got me thinking and the fact that it's set mostly in the radio station gave me a sense of helplessness when they would talk to someone "on the air". Definitely worth checking out, if you have the time. 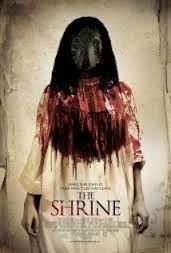 The Shrine is another film that zigs when you think it will zag. Intense and brutal in parts, it is one of the better ones on the list. 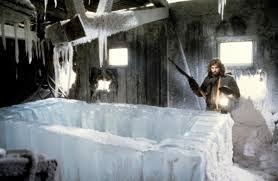 Hey look, I just found a giant empty sarcophagus, here in frigid, desolate Antarctica. More mystery (who is the alien?) and more body horror. This is easily John Carpenter's best movie ever. Amazing. 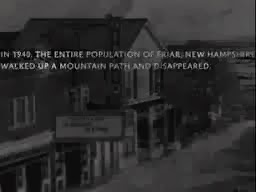 Another pseudo documentary, this invents a weird event from the past and sets a group to investigate it. This group is trying to figure out why an entire town in New Hampshire decided to disappear in 1940. Like others on this list, it has it's moments, I just was not satisfied with the ending.


Lots of different ideas for Call of Cthulhu, or some other creepy role-playing games out there. Definitely non standard thinking in some cases. Go ahead and give them a shot.
Posted by Jim Yoder at 1:30 AM No comments: