Getting a replacement battery for my laptop, hopefully this Friday. Making posts on my phone sucks. Watched Mad Max Fury Road over the weekend and it was amazing. So much over the top weirdness, I wish I could watch it over and over again. The cars, the characters, and the locations were wild freaky fun. I left the theater wanting to run a Broken Moon game in that world. Anyone out there have any plans to do that? Maybe ideas for their own auto-rific, guzzoline apocalypse?
Posted by Jim Yoder at 2:20 PM 1 comment:

Oh man, what a blast. Had a rocky start, print my pre gens at a certain store, and ended up with seven copies of the same four zero level characters. Then, an hour into the game I started to get a really bad headache. Thankfully we allowed neither of these to ruin our fun. In an effort to endear myself to whomever showed up, I brought a dozen doughnuts. They did not hurt, just saying. I had four players this time including Tim Snider, Rob Lambert, Drew Bergstrom, and my wife Kelly. 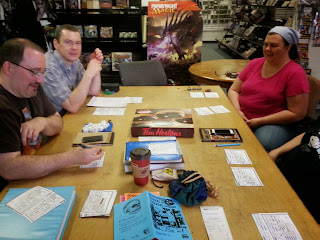 So we laughed through having multiple bikers, scientists and livestock ranchers. I used the rules for rolling up post apocalyptic zero levels in Crawling Under a Broken Moon, issue three. We had a plethora of mules that were put to good use.

Here are the highlights, since I don't want to give away too much. For our first big battle, Drew used his phone to play Motorhead's "Ace of Spades"while announcing his biker's attack. I felt that merited a plus one to attack. A scientist named Albert decided to stick his head into a room and discovered a crossbow trap early on. The fact that, in order to fit the adventure into a for hour slot, I cut to goal off 200 tribute truck points in half meant that a lot of the mall was unexplored. Now I just need to set up the next game, which only requires a date and time. 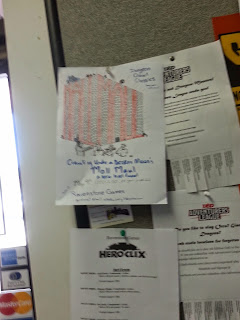 This game was extra exciting for me because Rob saw my flyer at the store,which normally does not happen. That is all for now,take care!
Posted by Jim Yoder at 7:42 PM No comments: