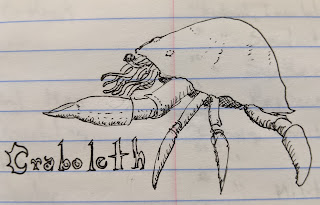 Quick sketch of possible friends you may meet in the marsh.
Posted by Jim Yoder at 10:28 PM 1 comment:

Here is a little something I talked about in episode 90 of my podcast Random Encounters in the Library. 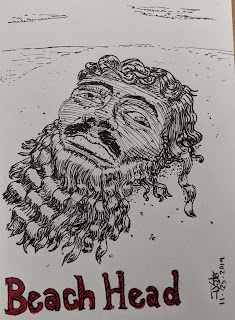 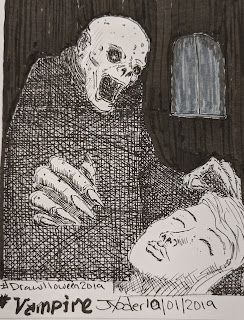 Day one is Vampire! Stay tuned for more!
Posted by Jim Yoder at 9:50 PM No comments:

Preview of next Saturday's episode

Unfortunately I'm not able to pick up the Doctor Who magazines from my local comics shop. Thankfully I work at a bookstore, when they do finally show up in the states I get a bit of a discount. 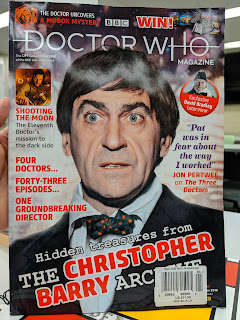 Finally, the issue with the new (to must of us anyways) pictures it's out. Saturday I'll guys about this, along with their Target books special. How you all can make it!
Posted by Jim Yoder at 5:59 PM No comments:

Pics of my FASA Doctor Who adventures 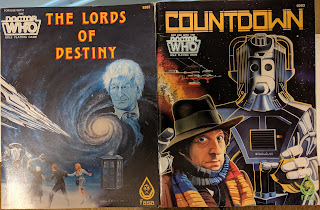 Starting with Lords of Destiny, where the PC's lands their TARDIS on a world ship that is traveling faster than the speed of light. If they can't convince the "locals" to cooperate, the universe is in jeopardy.

Countdown has the PC's materializing on another spaceship, this one on a mission to deliver a vital serum to a plague ridden world. You need only look at the cover to realize who is going to spoil those plans. 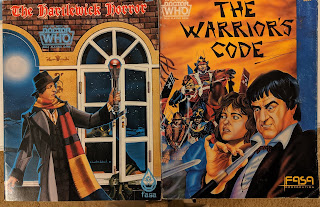 The Hartlewick Horror, by Ray Winninger, reportedly originally written for Call of Cthulhu. When it wasn't accepted by Chaosium, it was adapted to Doctor Who. It definitely fits, disappearing villagers, archaeological dig at a druidic mound, and unexplained energy fields. Very reminiscent of Image of the Fendahl.

Then we come to The Warriors Code, the first one to be perfect bound (?) Where the others were stapled. The TARDIS is forced to materialize in feudal Japan after colliding with Time ship. A power play is occurring amongst the samurai and the PC's must navigate the politics in this land of the rising sun.

More on these in the podcast, at https://anchor.fm/jim-yoder
Posted by Jim Yoder at 12:45 AM No comments:

The there main books from the box set, still in decent shape. Love them!

The only other FASA Doctor Who products I had ever seen on the shelf when the game was new!

I'll be back with the second half of my FASA stuff.
Posted by Jim Yoder at 7:35 PM No comments:

What I had hoped was just allergies has turned into a cold. Her is the list I mentioned on last night's podcast, apologies for the lateness.
1. Silver Spur
2. Cougar's Den
3. Schmitty's
4. Copper Penny
5. Cloven Hoof
6. One Eyed Jack's
Use it as a random table or inspiration for new names. I've got some more floating around, I might stick them into my zine. Have fun, and catch you all later.
Posted by Jim Yoder at 9:23 PM No comments: