So, this year's Free RPG Day was a bit of a bust. I had decided not to run a game and enjoy the Father's Day weekend. My flgs unfortunately was unable to get in on it (apparently it was sold out) and therefore I went to a store that was thirty minutes away, which could have been worse. I had been wanting to have this place as a secondary location for running DCC, so when I got there I asked how they handled people running RPG's. By the way, this is Java Game Haus at 11018 Old St Augustine Rd #103, Jacksonville, FL 32257. For running a game, you pay nothing, get a 20% discount, and recieve one dollar per player. To play, you pay five dollars and get a 15% discount. So what I would like to know is, what are your feelings/opinions on this? I'm torn because not everybody I know has a fiver to toss on playing a game. Does this encourage hot dogging GM's trying to outdo themselves and each other, in order to get players? I could come up with different extremes, but you get the point. 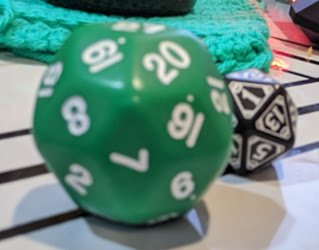 So for the free part of Saturday, they had a table that I rolled on to determine what I got, and I rolled a one. *Hah* I had a choice between the Pathfinder adventure or a Starfinder die. I chose the die, which you see above hiding behind the D30 I purchased. I asked about the DCC quickstart, and was told they were for the people playing in the adventure/demo later. I would have jumped in on that game, but like I mentioned before I had made other plans. So on one hand I was a bit disappointed to not have it in my hands but then if there were people turning up for a DCC game then I should be alright getting players.

Which brings me back to you guys, please let me know what you all think of this set up. I am seriously on the fence. Thanks for reading and take care!
Posted by Jim Yoder at 2:24 PM 4 comments: