In Latham, at the edge of the great forest, the local druid has gone missing. Someone or something named Vol Choloris has moved into the area and may have something to do with it.

March 16th, Sunday 1:00 PM. at Ravenstone Games 1675 Karl Ct. Columbus, Ohio 43229. OSR gaming, using Labyrinth Lord rules and there will be some pre gens and if you would like, you can roll your own. Come in and sign up, and I will try not to pull a TPK.
Posted by Jim Yoder at 2:52 PM No comments:

So here I am, watching Genesis of the Daleks, thinking of what I should write in honor of big Tom's birthday. Obviously if you are familiar with Mr. Baker then you already know how amazing Genesis is. If you are not familiar then what are you waiting for? Go watch it now, this will wait. No, I have decided to tell you all how I first discovered Doctor Who through Tom's wonderful first few seasons. The local PBS station had seasons 12 through 15, Tom's debut in Robot until Leela's final story Invasion of Time. Soon after getting home from school I would rush down into the basement to watch whatever episode was on. In the beginning they played an episode at a time, later when I was in middle school they would edit the episode breaks in each story so it would play like a tv movie. 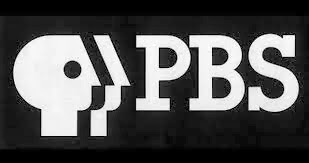 The television was at the far end of the basement, cold and grey with a big soft chair set in front a small television set. I was not always able to make it down there in time, therefore I was only able to get parts of stories. Despite the dismal surroundings I was warmed by the adventures of this crazy person, not a traditional leading man, he fought with his wits. He was not afraid use a little force, though very rarely. Action, drama, and humor with Tom pulling off the most amazing lines and making his portrayal so believable. Living out in the country and not near enough to a major city to have access to bookstores I only knew what I saw, which meant he was the only Doctor. Which became confusing when I finally had access to a bookstore and discovered the pinnacle novel range. There are other Doctors?

Eventually the station began playing the rest of Tom's tenure as the Doctor, and then Peter Davison's and so on. I enjoy each Doctor for what he has brought to the role (yes, that includes Colin Baker) but I will always be gratefully enamored of Tom Baker for lighting the way for me. Happy 80th birthday, sir! 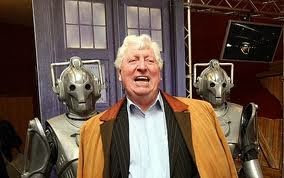 I have set a date for the March game, once more to be ran at Ravenstone Games, Saturday March 15th at 12:30. It will be Labyrinth Lord (OSR retro clone, basic/expert D&D) set at the edge of a vast forest. The pc's will be investigating strange happenings amongst the trees. I will have a sign up sheet up there later today, see my previous post about the subject as I have a couple of examples up there now.

The April game is tentatively Andy Hopp's Low Life using Savage Worlds, no fixed date on that one yet. A reminder, February's game is Streets of Bedlam, pitting pc cops against the mean streets of Bedford and Lamrose (Bedlam to the locals) come on down and sign up! See you later.

Saturday's Game and How to build a better sign up sheet

So, yesterday's game did not go off, and I feel my sign up sheet was to blame. It only gave the barest information-what, when, where. So I have taken that lesson and applied it to my future games, starting with February onward. When putting your sheet together you want to let people who may not be as familiar with the game to know what it is all about(ie. Shaintar=high fantasy/good versus evil) therefore they will be more willing to give it a chance. Also, in case they are curious but have some questions, leave an e-mail address or telephone number where they can get a hold of you. Once you have all that together you can give it a little flash or keep it simple, but these tips should help you get some players to your table. I will be rescheduling the Shaintar game for later in the year, maybe doing two games in one month. I hope this helps you guys out there. Take care!

A reminder for you all, next Saturday at Ravenstone Games I will be running Shaintar starting at 12:30. Pre gens will available and beginners to the savage world system are welcome. It will be set during the aftermath of the attack and subsequent retreat of the Kalanesh forces. The characters are part of the the Grey Rangers, sent to check up on a village in the mountains. Should be easy, your commanding officer even asked if you could bring him back a jug of some mountain hooch the village is known for. Sign up and I will see you there! 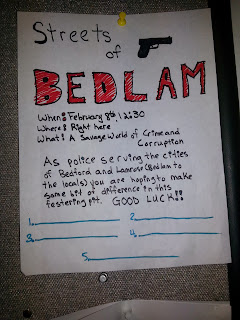 Next month, February 8th at 12:30, same place, I will be running Streets of Bedlam. Another savage worlds setting, this is a world of crime and corruption. The characters are cops trying to make the city better, or maybe not. Some people just want to watch the world burn. There is a sign up sheet for both games at Ravenstone now. Take care folks, see you later!

February eighth at 12:30 I will be running Streets of Bedlam. Crooked cops in a crooked city, can the PC's make a difference, or will the festering pit of Bedlam swallow them whole? Picking this as the next game was easy, since I have recently started watching Life on Mars and Luther. John Simm is amazing in 'Mars, I am loving all the period stuff in there (it is set in '73, kind of) as well as the investigative stuff and the mystery of why he is there. I am halfway through the first season of Life on Mars but only the first two episodes of Luther. I Idris Elba in everything I have seen him in, in here he has a massive physical presence but he has moments of thoughtfulness. Just wonderful! I will have a sign up sheet for the Bedlam soon, but remember I still have the Shaintar game on the 18th of this month. Come to Ravenstone, it will be a blast!
Posted by Jim Yoder at 1:05 AM No comments:

The Shaintar is set after the Kal-a-Nar empire's forces have pulled back and the pc's are part of the Grey Rangers sent to check on a village in the mountains. It is a small village, away from any real fighting, so there should be no problem, eh? There you go, head on over to the store and sign up and take care, I will talk to you later!
Posted by Jim Yoder at 12:58 AM No comments:

You guys already know about one of the things I have decided to do in the new year, running a game once a month for the year. It starts on the eighteenth with Shaintar, 12:30 at Ravenstone Games. Really looking forward to that, and in February it will be Labyrinth Lord in the lair of Vol'choloris.

The past couple of weeks I have been doing some illustrations, some in preparation for rendering in watercolors. This year I will get back into creating art as well as interviewing artists. A crazy idea of mine is to set up a tent in my yard and use it like a mini art gallery to show some of my work and whoever else would like to join me. Like this past year, I will be purchasing one Doctor Who dvd per month, starting with Reign of Terror for January. Watching it as I speak, a fun little adventure that I have previously only read as a novelization.  Hartnell is wonderful, working his way to Paris to rescue his friends, bullying the bullies (especially the jailer) the first Doctor is quite wily! Take care everyone!