When traveling somewhere new, I like to see if there are any game stores in the area. So recently I was in Asheville, North Carolina and decided to check out the Wyvern's Tale.The store itself is fantastic, with plenty of games separated into boardgames, card games, miniatures, and rpg's. All in a neat, orderly atmosphere.     The second floor held the gaming areas where there were a few groups playing. I was impressed by the fact that in addition to trash cans, there were also containers for recyclables. Their hours are Sunday through Thursday 12-8, and Friday/Saturday 12-10. They have regular game events throughout the week and December 23rd, Jason Morningstar (creator of Fiasco) will be at the store, signing books and talking with folks. All in all, I definitely will stopping back in if I am ever around Asheville, a really great experience.
Posted by Jim Yoder at 9:50 AM No comments:

Pandokemon, Gotta Catch Them All!! 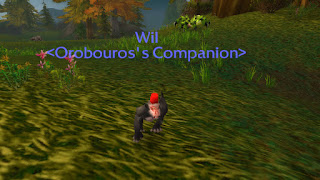 So, it's been awhile, between work and internet going out for about a week I have been absorbed by WoW and their pet battles. The best thing about it, in my opinion, is that you can name your pets. My first task was to name my Darkmoon Monkey Wil, after Mr. Wheaton. I mean look at him, doesn't that fez just scream "Wheaton!!"

As I have said before, there are a few ways this resembles Pokemon, and that is a good thing. The achievement system really pushes you along. Many times I have meant to stop playing, only to have a little voice in my head say "You just need to capture a few more pets." or "You almost have that next achievement!"

Anyone out there playing WoW and doing the pet battles? Let us know what you think, and what (if at all) you have named your pets? Take care guys.
Posted by Jim Yoder at 2:08 PM No comments: