T-Rex stats, Alucar and beyond

In a cavern adjacent to Alucar is somewhat of a lost world. One of the creatures in there is tyranosaurus rex. Here are the stats I worked up for it. Let me know what you think. 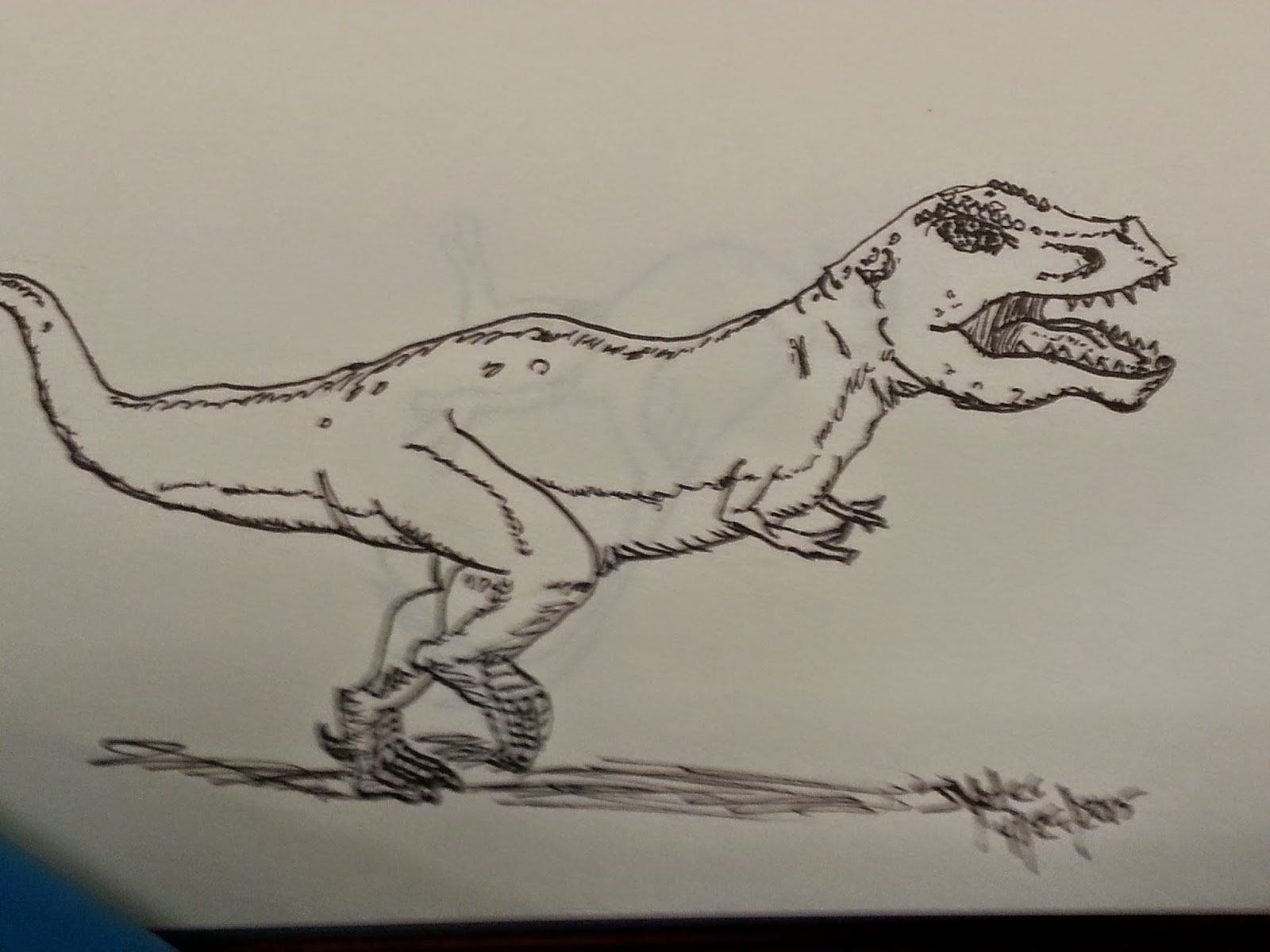 For the Love of Random Creature Generators

Reading about Tim Snider playing around with James Raagi's Random Esoteric Creature Generator had me digging out my copy. My first run through gave me something interesting that I will share with you all in the next few days. 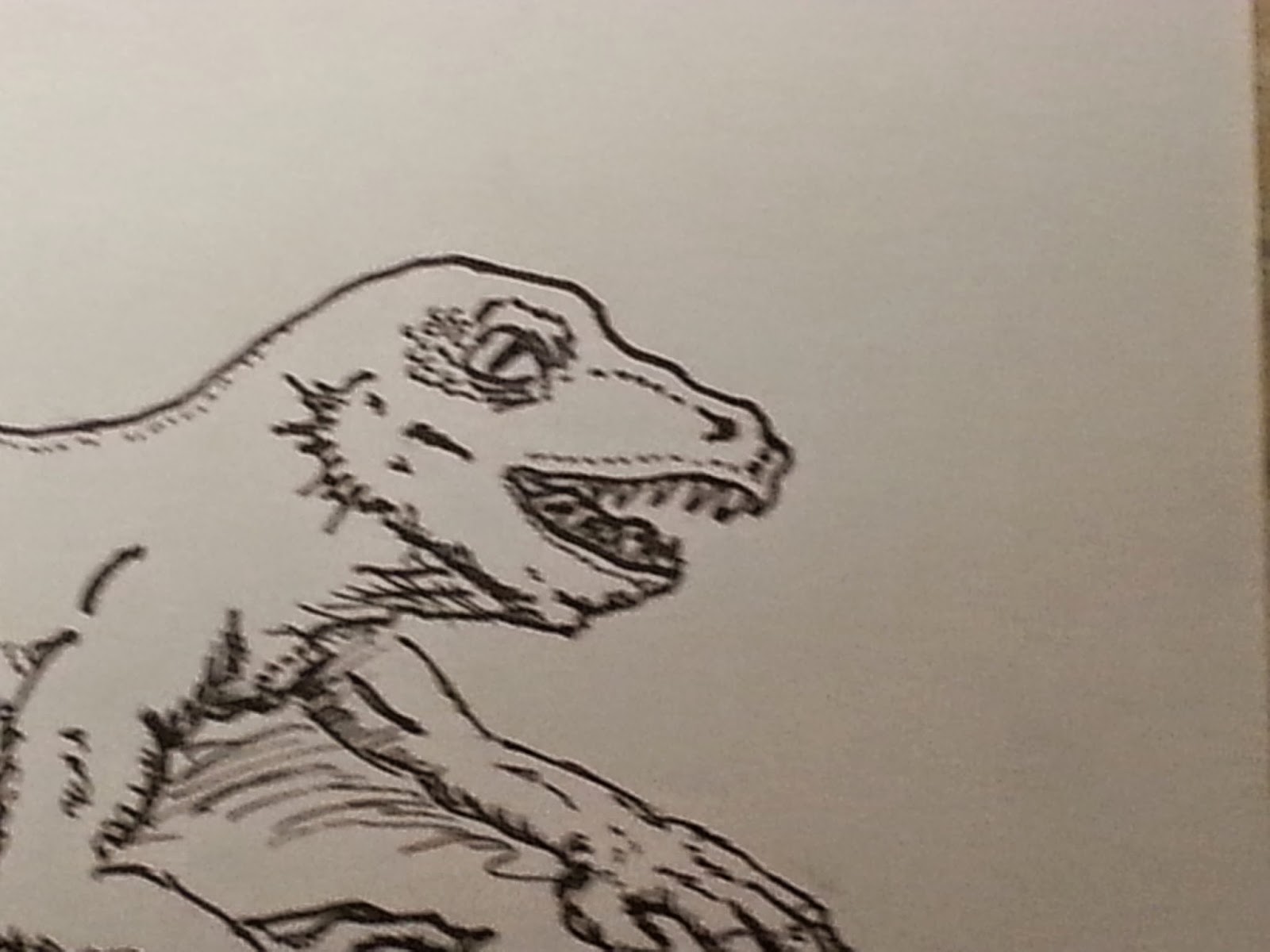 I plan to stat it for a few different games and it gave me an idea for a mini setting.This should be interesting.
Posted by Jim Yoder at 4:06 PM No comments:

Had a lot of fun this past Saturday, and was glad I could participate in my own way. I got a kick out of playing in public, though only a couple people asked about the game.  Thanks go to Tim Snider for getting us all on the same page, and I hope we do it again next year. I have been daydreaming about what I could run. I wonder if I could get away with Cults Across America? I can dream, can't I? 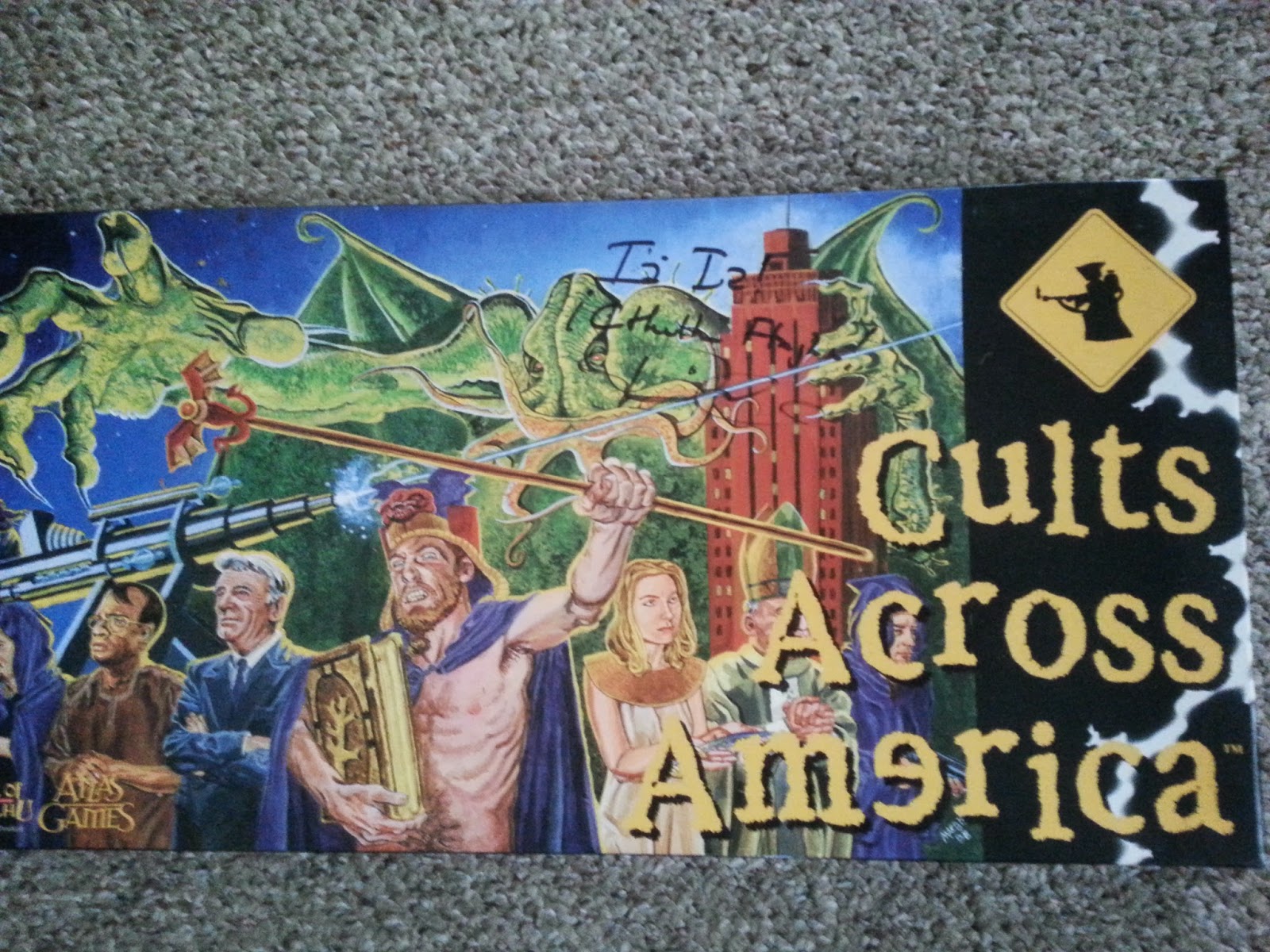 I have my first road crew game of the year set up for May 9 th, I'll be running the fun and frenetic adventure"Mall Maul" Reid San Filippo. 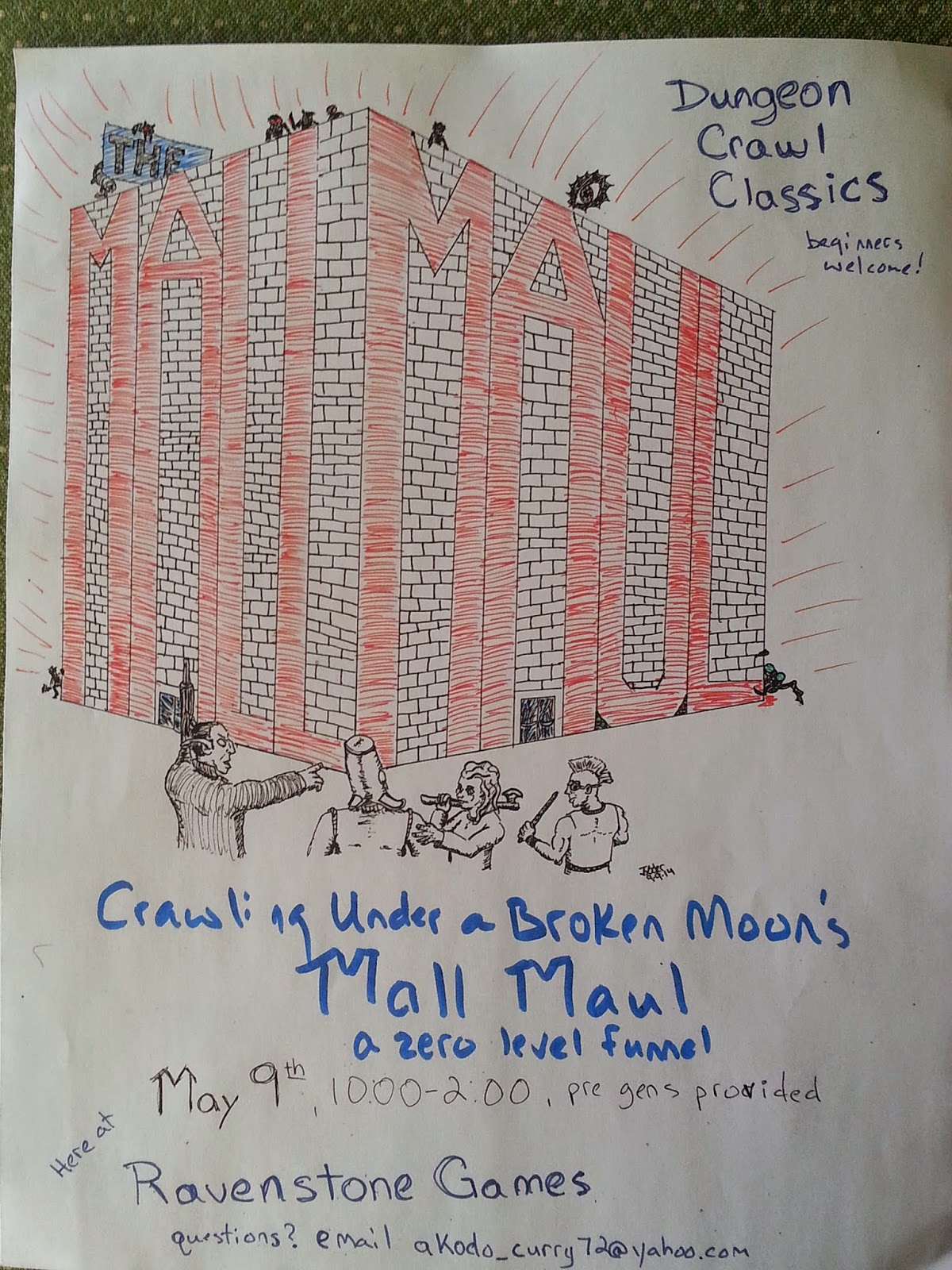 Having experienced it as a player, I am excited to be running it. As is tradition, I made a flyer and posted it at the flgs where I will be running it. I needed to keep the momentum going, meaning scheduling the next game or two. I ran Crawljammer last year, and the game on May 9th is from Crawling Under a Broken Moon. I felt I should continue with even more zine love.So my second game will be Street Kids of Ur-Hadad, by Edgar Johnson. I am looking forward to running it and letting you folks hear all about it afterwards.
Posted by Jim Yoder at 9:14 AM 1 comment:

Since this tablet keeps throwing the cut and paste stuff in the middle of my post I had to make it separate.  Here...
ToThe Savage AfterWorld -- http://savageafterworld.blogspot.com/ -- Escape: Zombie City by Queen Games

I have had a copy of Nano Bot Battle Arena since this past Con on the Cob, where my wife and son played a demo and then picked it up. A game for 2-8 players, running 30+minutes, it seemed a good game to play at the local coffee shop. 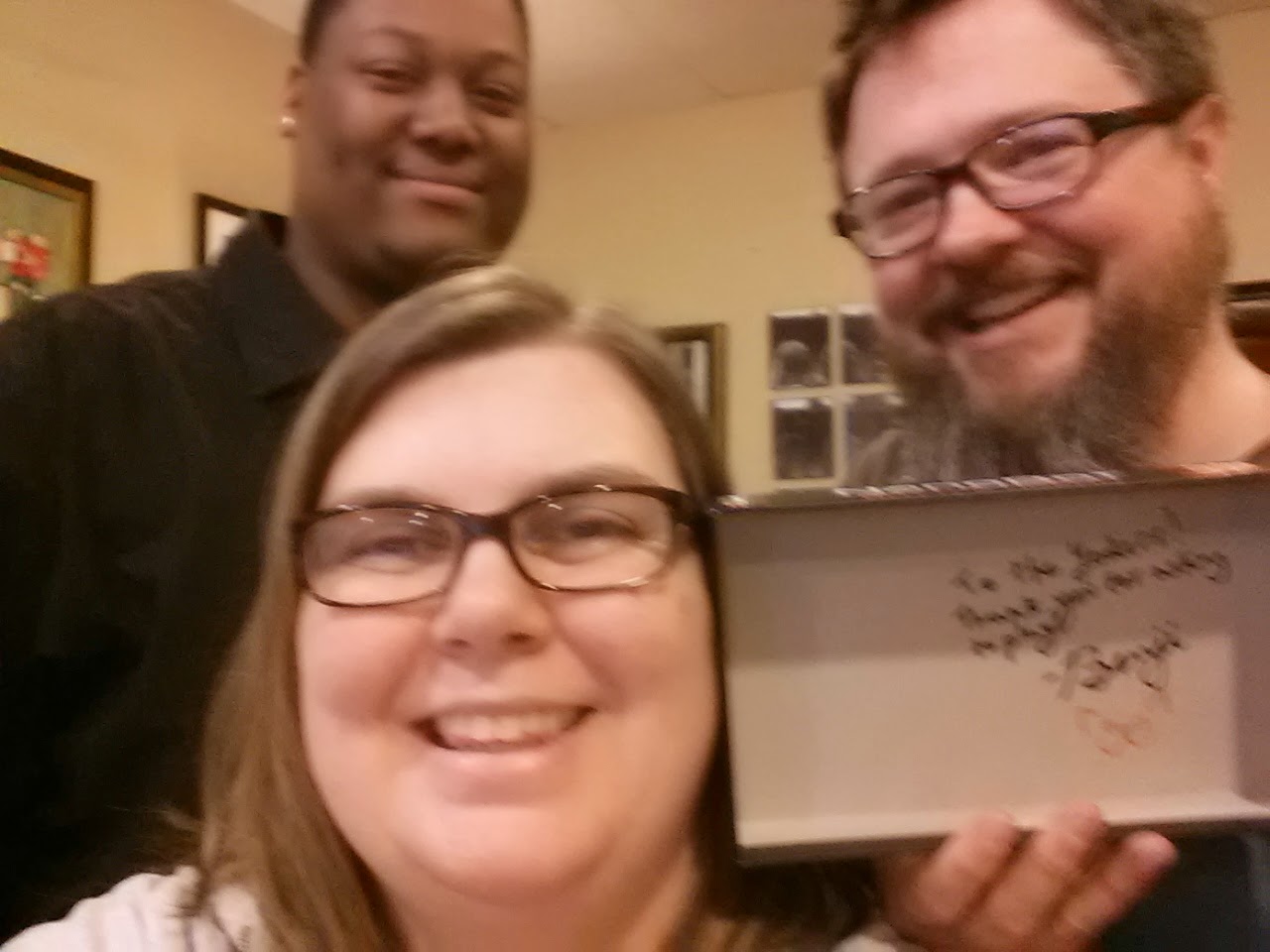 The players were Kelly, Jeremiah and myself. The premise is that each player is a scientist trying to grow the longest strand of nano bots while hindering the other scientists` efforts. The game ends when someone runs out of nano bots in their cache. There are eight different nano bots and eight different reaction cards (which have one, two, or three charges) 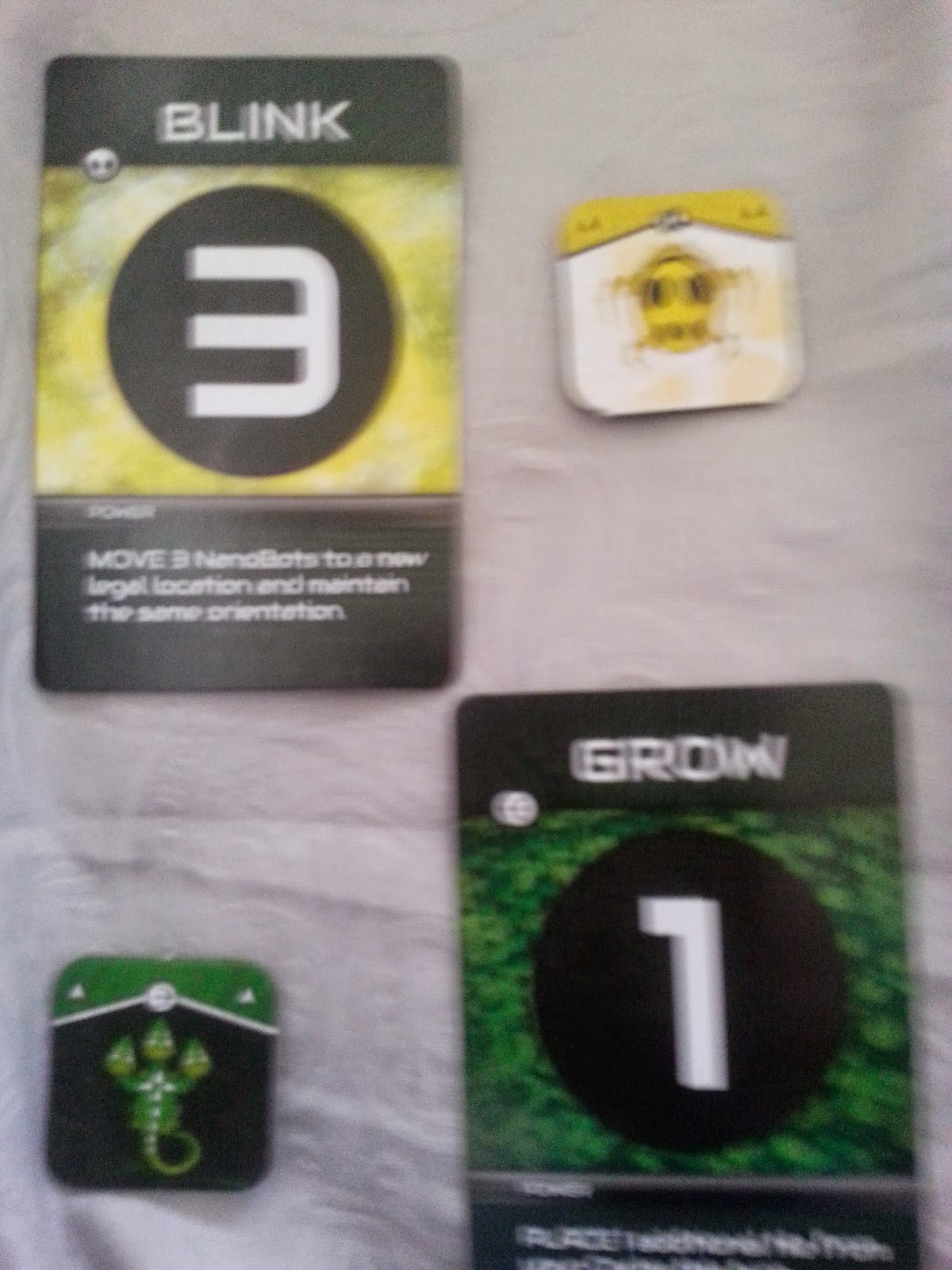 The tile on the top right is a ghost nano, and the card it has an affinity for is blink. If I am playing that blink against a ghost player, it's charge drops to a two. On the bottom right is the echidna, whose affinity card is growth. If I am using the echidna and play that card, the charge becomes two instead. 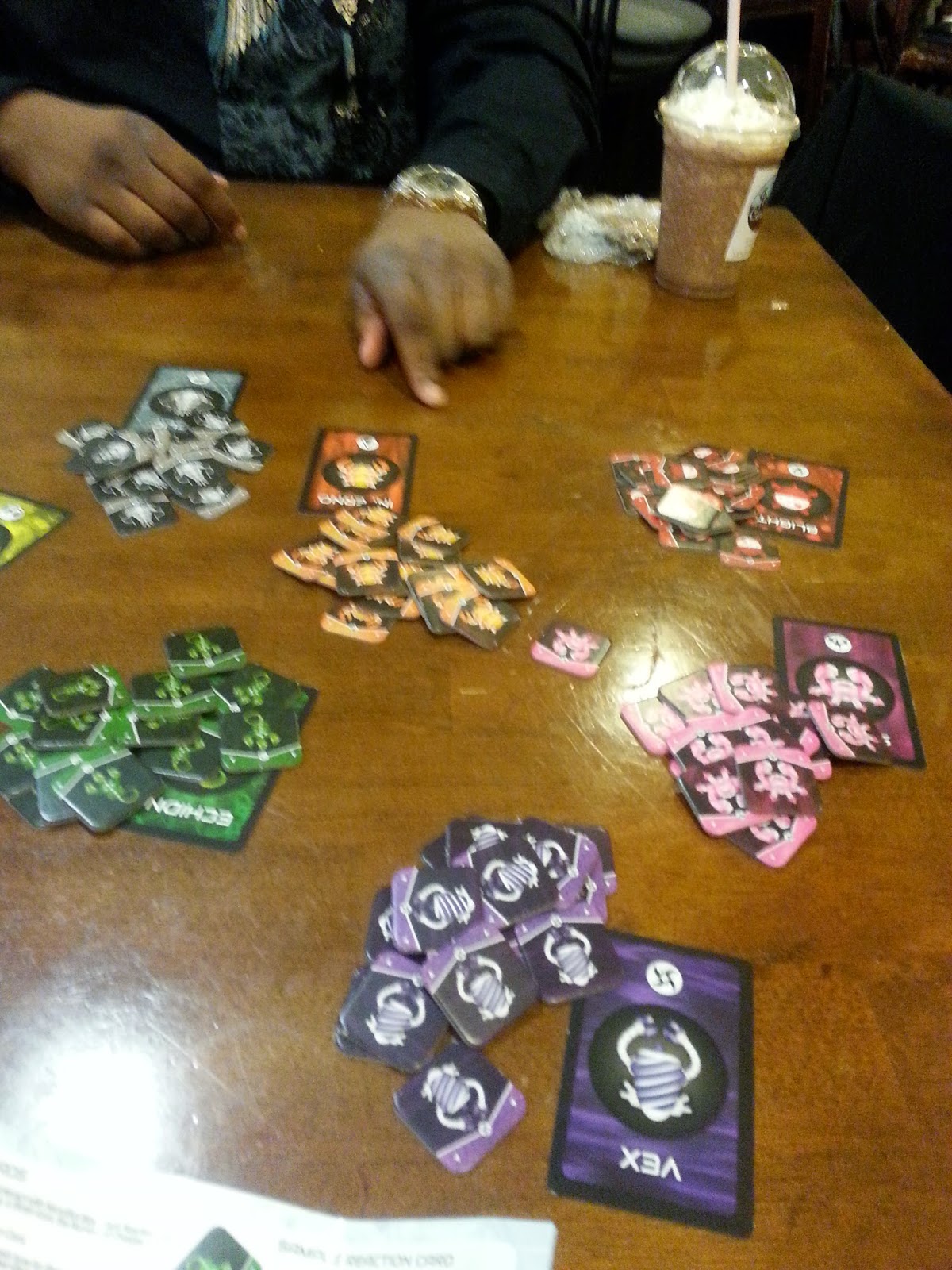 To start, each player picks which nano he wants to use, then draws a starting hand consisting of three 1's, two 2's,and one 3. The starting player then placed his tile in the center of the play area, plays a reaction card, and then draws a card. Then the next person builds off the first tile, and so on until someone's cache runs out of bots. 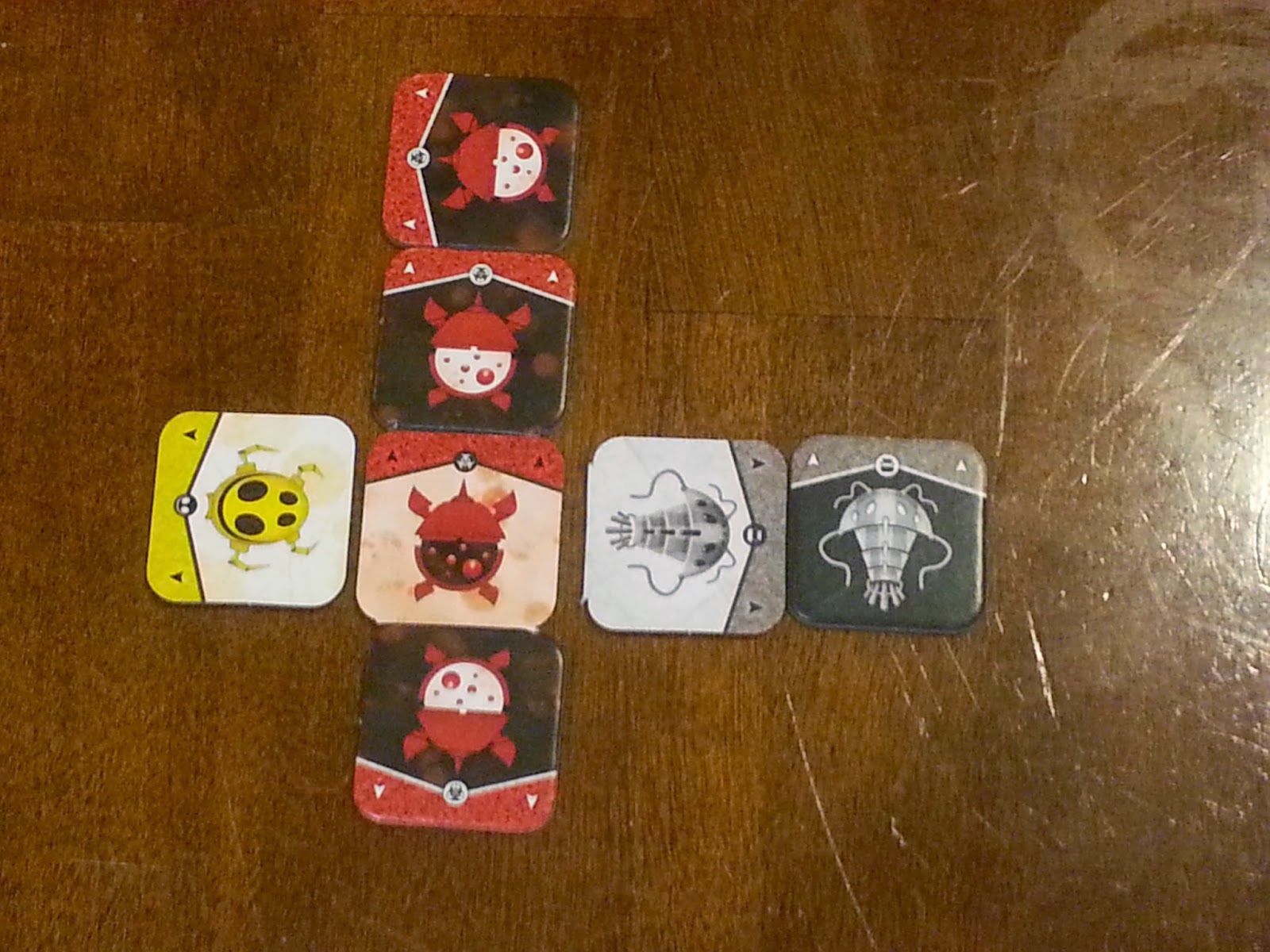 Then whomever has the longest chain wins. There are plenty of ways to mess with your opponents between tile placement and card use. Once players get used to how things work, turns run much smoother. All in all it was really fun, and we played three games in a little over two hours. Thanks for bearing with me, my tablet has been crashing. Hopefully you have checked out the other blogs, if not then here ya go.

Here we are, and no post. Some of you may be wondering "What the heck, where is the Nano Bot goodness I was promised?" Well I decided to play it today at a local coffee shop (Java Central) and then report back to you all. Here is a peek at the box... 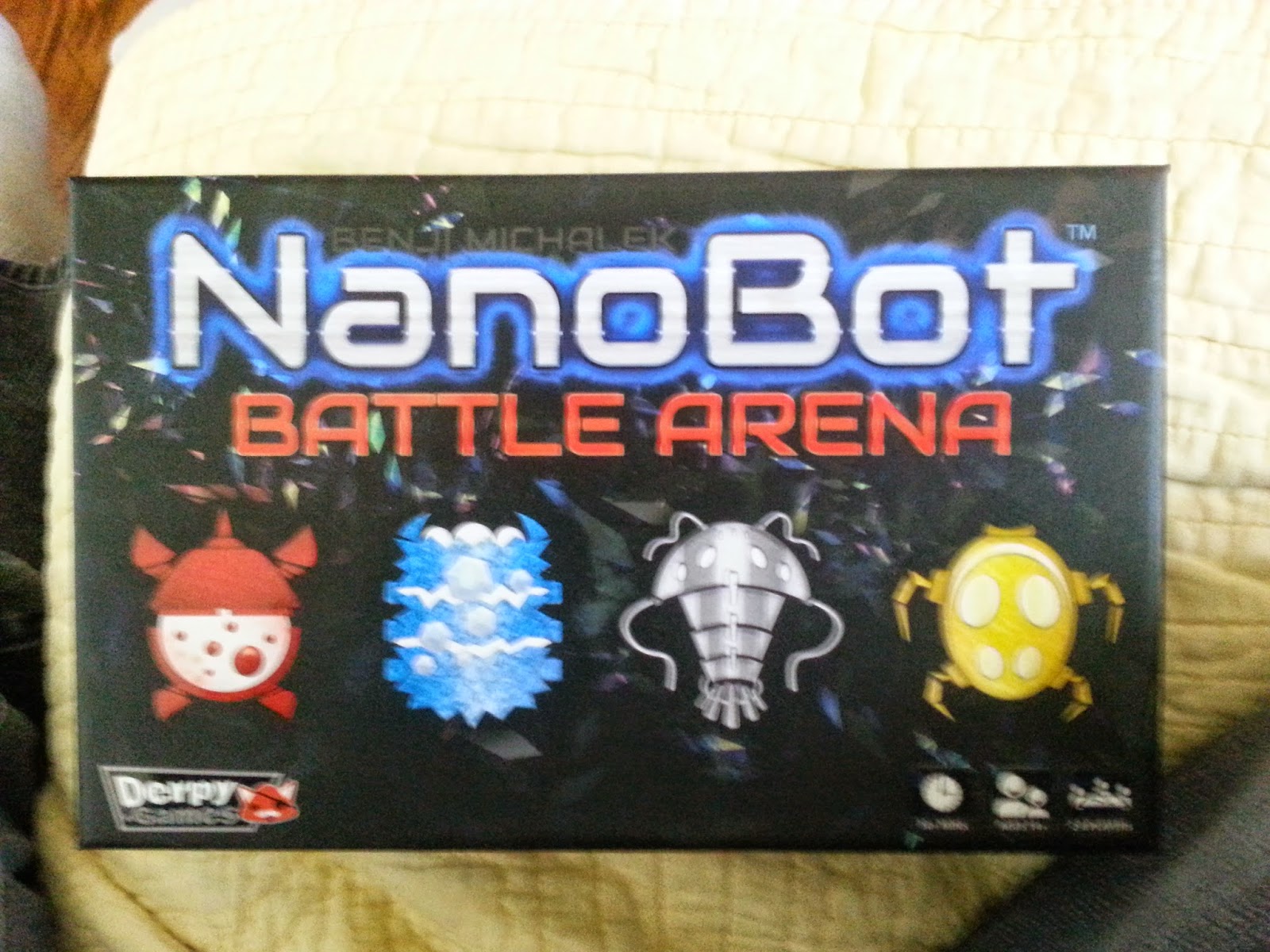 I will be running it at 1:00 pm EST then sending the post out out to all of you wonderful, and very patient people. Take care and go play some games!

Saturday, May 9th from 10am until 2pm at Ravenstone Games, I will be running Mall Maul. It is a zero level funnel, so I will have plenty of pre gens on hand. Here is the synopsis, "Due to an unfortunate series of events, you and twenty or so of your fellow villagers have volunteered to search a nearby shopping mall. The goal is to bring back enough loot to appease the raiders who are coming to collect the tribute. You have always been warned to stay away from there, but there are no other options. The raiders are coming and take what they want if they are not satisfied by what is offered." 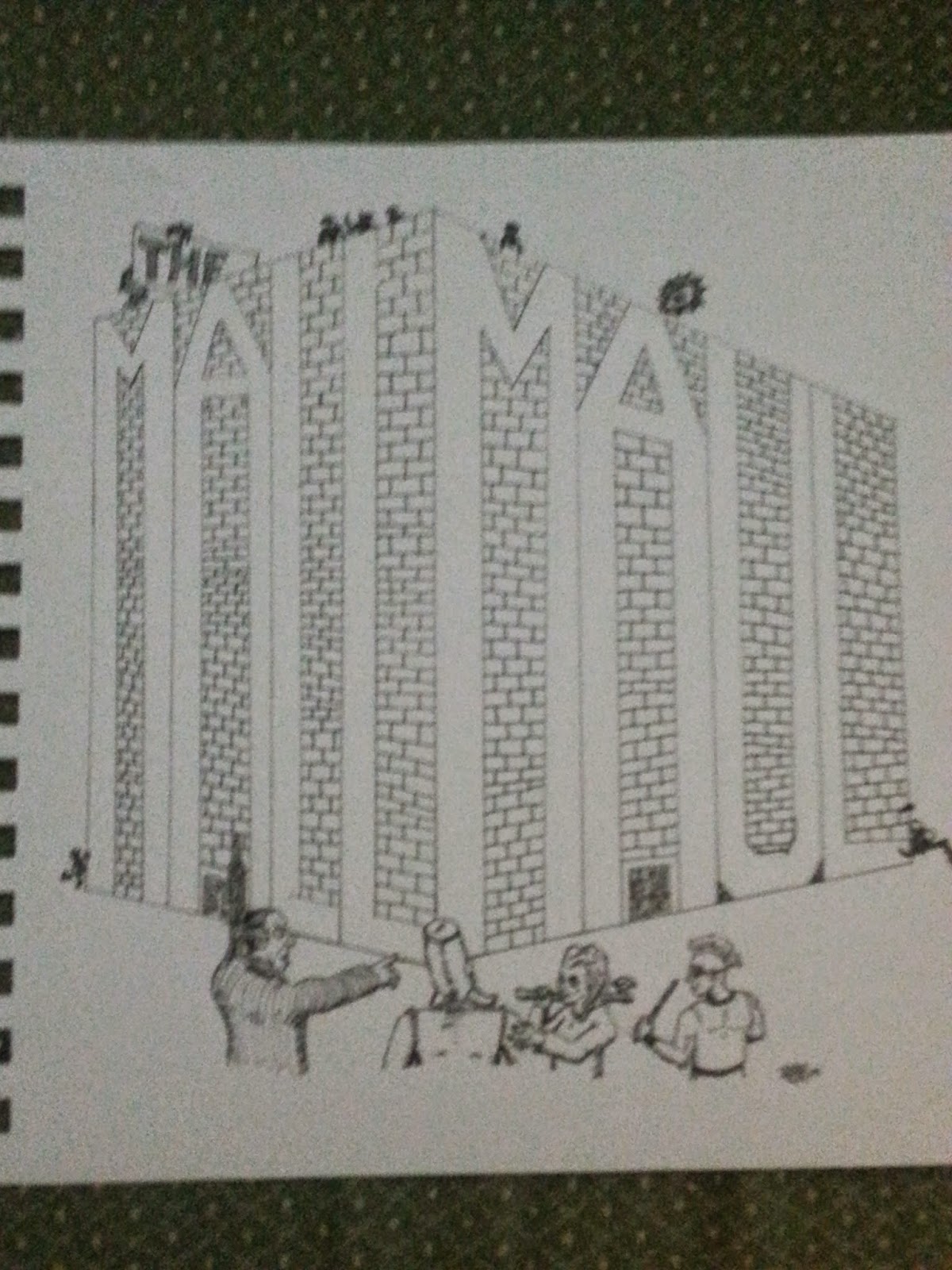 This is a Crawling Under a Broken Moon adventure by the inimitable Reid San Filippo, so there will be plenty of post apocalyptic weirdness going on. Ravenstone is located at 1675 Karl Ct, Columbus Ohio 43229. So come on in and roll some bones, it'll be fun!

Look what I got! Gary Con VII (part two)

Here we are, the last bits that I brought back from the con. 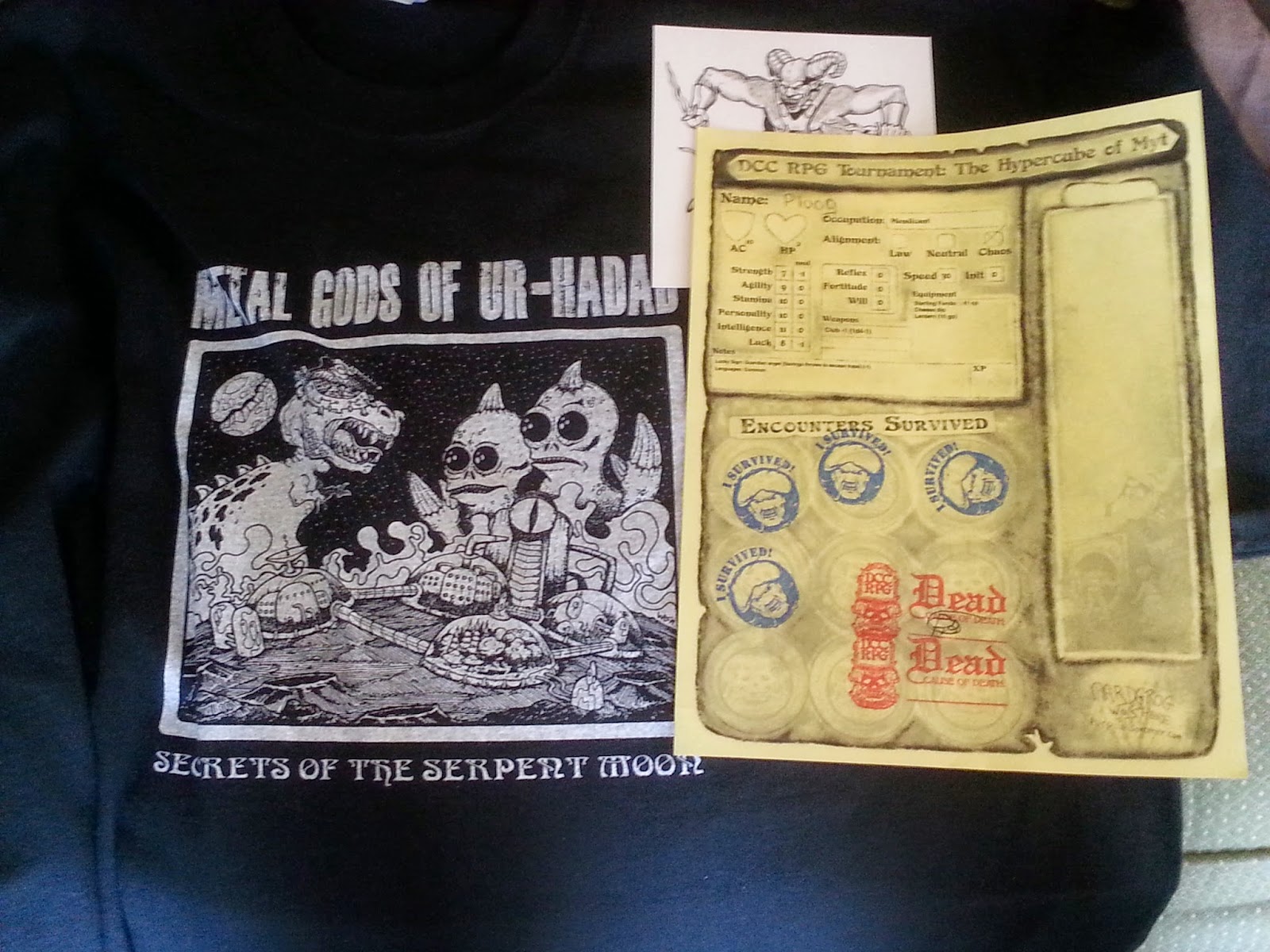 Of course, I needed to get a Metal Gods t-shirt to complete my stylish wardrobe. Meant to pick up a Gary Con shirt, but this was a necessity. My friend Brian Thomas gave me an original of his, a four armed demon wielding wicked looking daggers. For the Hyper Cube of Myt, I had a mendicant named Ploog. In addition to having a club, he had some cheese dip he was willing to use.
Lesser Gnome had Tophas dice for sale, and they were giving away two different pins as well as one of their dice. I ended up with three of those dice, due to my forgetting about the free stuff Zach had given away earlier in the con. There you go, an amazing event with awesome friends and cool merchandise. Here's hoping I can make ut back next year!

Look at what I got! Gary Con VII edition (part one)

I  have finally de-pressurized from Gary Con. I managed to get back to work, even though I would have loved to have an extra day or two just resting at home. Now I am back and here, as promised, are the various items I picked up at the con. 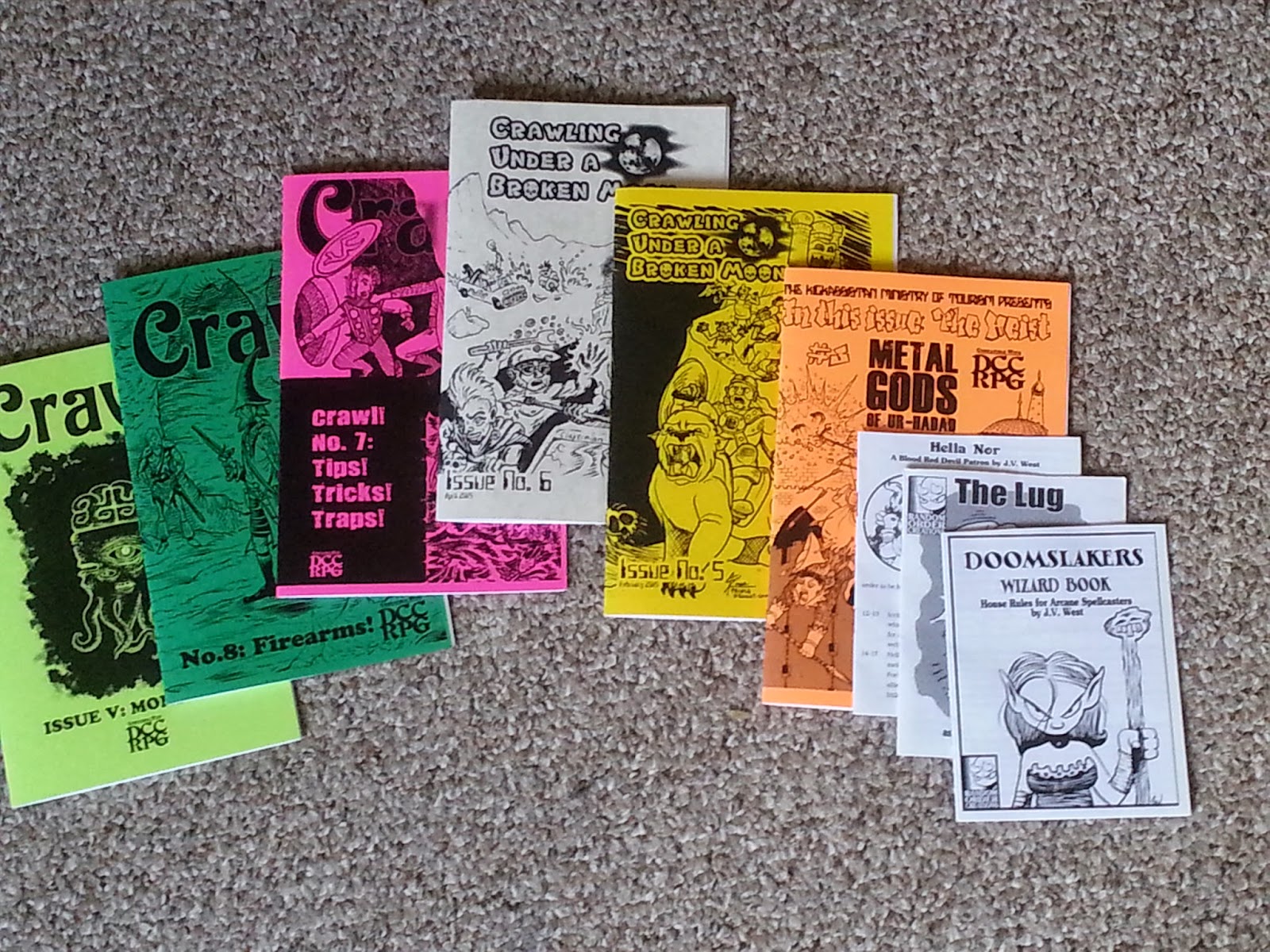 Here I rounded out my fanzine collection, unfortunately the latest Crawljammer issues were unavailable. Crawl! is an invaluable resource that allows you tommold the DCC system to what you want. Issue 5 has an orc character class as well as rules for creating monsters. Number 7 helps with using/creating traps, making interesting fountains, and giving ogres a twist. Eight is the fabulous fire arms issue. In addition gun rules, there is an invasion toolkit that can facilitate adding guns to an existing campaign.

Metal Gods released it's third issue, which continues to flesh out the city of Ur-Hadad wonderfully. It also contains a heist toolkit and a new patron, Atraz Azul! Crawling Under a Broken Moon, issue 5 has Reid's post apocalyptic version of He-Man and the Masters of the Universe. Located in what was once Canada, but is now called Aetheria. There is even a new class, the Aetherian hero, to play in this new land. Number 6 has what you want for cars and road gangs in your game, as well as a new class; the petrol head!

Finally we have three little zines that J.V. West brought to give away at the show. Hella Nor is a new devil patron for DCC, as well as two monsters; the devil nymph and the hell cat. The Lug is a character class for retro clones, it is basically a big oaf who can throw his weight around. Finally there is the Doomslakers Wizard Book, containing some great houserules for magic users in any retro clone game. I really like the section regarding wands. Really cool stuff 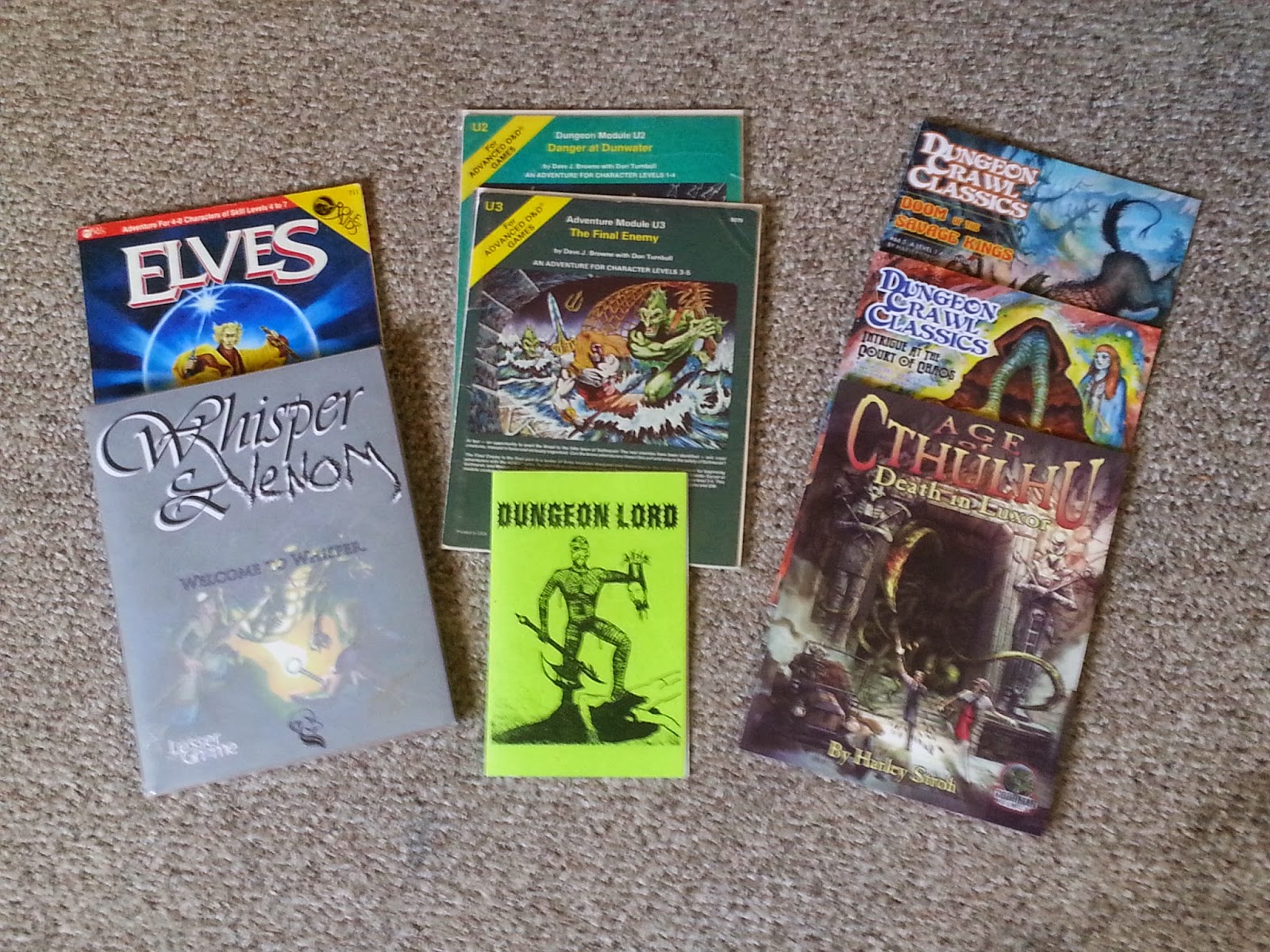 Role Aids was and is an amazing third party resource for first edition dungeons and Dragons. Since I already own the Dwarves book, picking up Elves was a natural choice (see what I did there) It includes details on light, high, ice, wood, grey, dark and demi elves. There are maps of elven buildings, towns and cities as well as six adventures. Whisper and Venom, from Lesser Gnome, is a great setting/adventure. Zach Glazar and Lloyd Metcalf are pretty cool to talk to, and since I had heard many wonderful things about it, I bought the basic set of W+V. Looking forward to reading it thoroughly at a later date.

TSR modules U2 Danger at Dunwater and U3 the Final Enemy completes the U series AD&D modules for me. U1 Sinister Secret of Saltmarsh is a fun adventure, so I am happy to have the complete series. Something I missed the first time through was an OSR zine called Dungeon Lord. The type is a bit small, but it includes two dungeons, with additional tables for customizing them. At least we come to the Goodman Games section here. I traditionally stick with purchases that I cannot easily make at my flgs. Death in Luxor was the first in their Age of Cthulhu line that starteda couple of years ago. Along with DCC rpg modules Doom of the Savage Kings and Intrigue at the Court of Chaos, these three are not easy orders for my local store. That is all for now, tomorrow I shall return with the last vestiges of my trip through the dealer's room.