This seems to be the case for the Dungeon Crawl Classics rpg, with Metal Gods of Ur-Hadad and Crawling Under the Broken Moon leading the way. Metal Gods fleshes out the great city of Ur-Hadad, with info on it's gods and a street urchin character funnel. Crawling is a post apocalyptic zine set in Murica and each issue so far (issue two just came out) has a new character class, a weapons article, new creatures and new location/encounter. These two are fairly new to the scene, thankfully I caught an interview with one of the Metal Gods creators on Spellburn (I think this is the one) and I have a copy of CUBM #2.

Unfortunately I know less about Crawljammer, a pulp sci fi zine (Bat Men of Venus) with new classes and creatures. Along with Crawl! we seem to have the bases covered; fantasy, science fiction, and science fantasy. Since Goodman Games has been concentrating on releasing adventures for DCC, 'zines have been where you can get new additions for your campaign, and from what I have seen and heard, the quality is fantastic. From new and amazing artists to great and groovy writers, you can find them here. It is kind of like a new generation for rpg. I realize there was stuff like Alarums and Excursions back in the day, but unless you were in an active gaming community you would never know about it. The internet and podcasts allow creators and fans to talk about these things and "boost the signal" when it comes to these 'zines.

So, what if we had a 'zine that was almost like the old gazeteers? Maybe something giving flavor to different creatures, regional goblin tribes? Perhaps the Festering Slit tribe is fond of using poison? The Copperclaws might be open to negotiation. This can be done with so many things in so many ways it is really exciting. That is all I have time for now, I'll get back to this later.

From Sniderman over at Savage Afterworld, we have the Deviant Database 2.0! Over forty new mutated monstrosities for your Mutant Future games. Some really freaky things have sprung from his fertile imagination, further enhanced by some wonderful illustrations by various artists (of which I am one) Some of the names are cute, basically a puns like the ayteeum (ATM) that poops gemstones or the pwnee who are humans with a horse's head. Each entry reminds me of the old "ecology of" in the old Dragon magazine, with a description and motivation for what the creature does. They are not all hostile, but they can all be pretty dangerous, and they are all interesting. I am looking forward to getting the physical copy, as well as the first database (currently I have the pdf) So give it a look, you'll be glad you did.
Posted by Jim Yoder at 12:44 PM No comments:

Holiday weekend here in the states, lots of parades, fireworks and cookouts. The annoying part is I started to get sick partway through it all. Saturday I thought it was allergies, now I feel like my head is constantly being squeezed, so it is probably in my sinuses. Enough of that, let's see what is happening in gaming.

D&D Basic dropped on the third, with the pdf being available here, I downloaded it and skimmed through it a couple of times. Looked good, they give you just enough to whet your appetite, five backgrounds (starting on page 36; acolyte,criminal, folk hero, sage, and soldier) two sub races per non human race (starting on page 11; dwarf-hill and mountain, elf-high and wood, halfling-lightfoot and stout) The cleric starts with the life domain, and the wizard entry has the evocation school of magic. The fighter has six fighting styles (archery, defense, dueling, great-weapon fighting, protection, and two-weapon fighting) and though the rogue only includes one archetype, the thief. I am sure I am missing something here, but that's how it goes when you are ill.

So, I had not planned to get the starter set, but when I heard that they had been selling out I checked my flgs and they still had two, so of course I snatched one up. As Mike Mearls mentioned, it has no character creation rules, since those are in the basic pdf, but there is plenty of things for running the adventure included. I am currently going through the starter box between bouts of nose-blowing and grumbling/coughing. 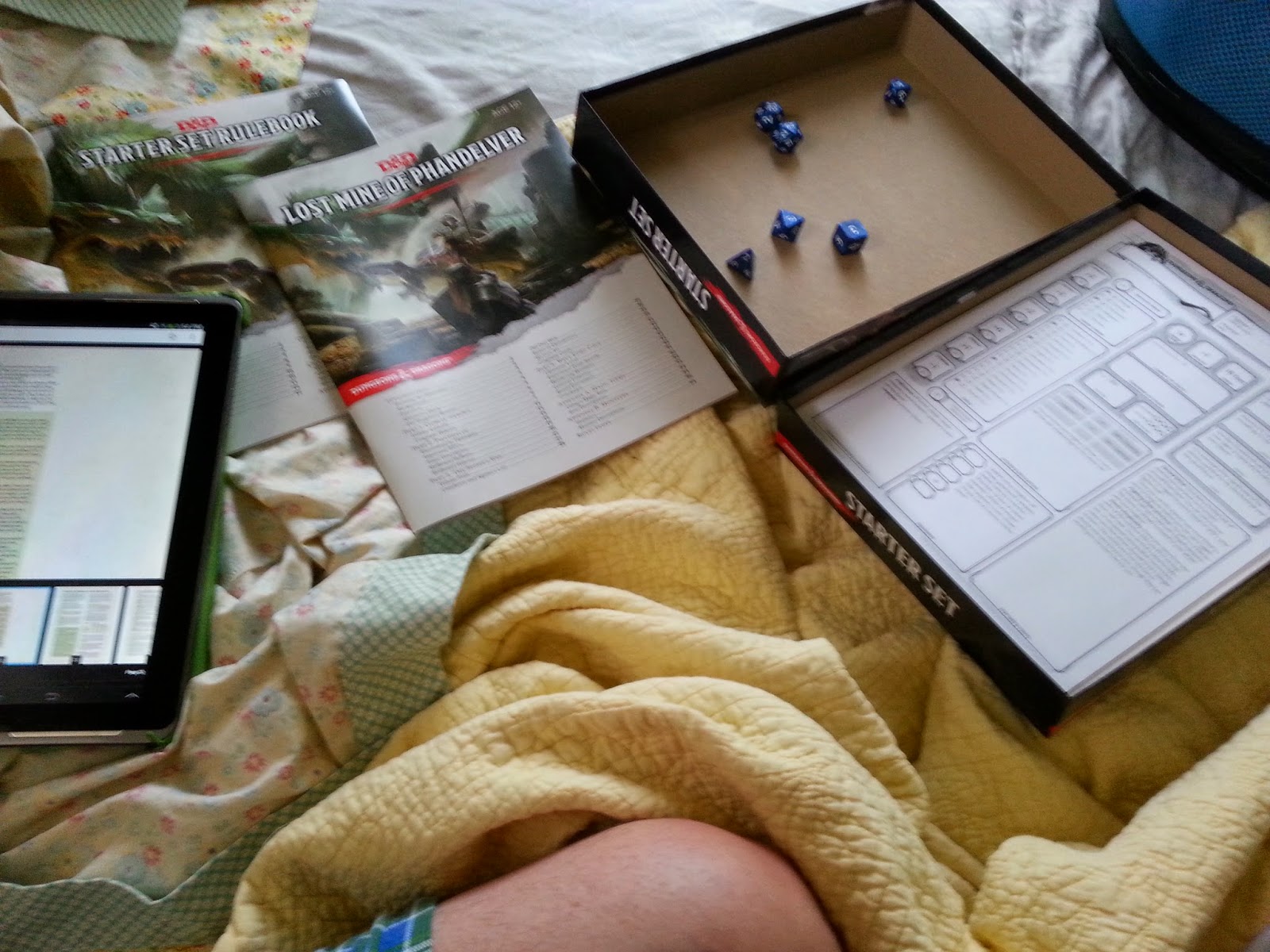 When I am sick, I usually make a nest so things I want to read are within easy reach, when I am not crashed asleep in bed.

Well, enough of that, anyone out there want to drop a comment, feel free to do so. I am hoping to be back to my old self in a day or so. Take care everyone!