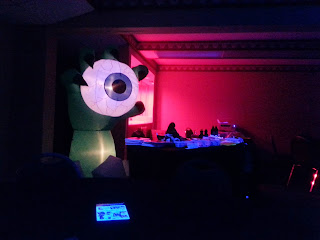 Running a bit late with this, but here you go. As I have stated before, cons are more fun if you get involved. Now, I had two seminars on Saturday that I was a part of, but I had not signed up for any games. I looked through the schedule and found a Realms of Cthulhu game that was available. So I got my ticket and when the appointed hour arrived, so did I. It was in the Rogue Cthulhu room and they had replaced the regular bulbs with black light. I would later discover that when you play in one of their games, you receive points that you can spend at their table. All kinds of things were there, from a little Cthulhu statue to
role-playing books. Enough of that, let's start playing!

Unfortunately I was the only one to sign up. So the gm (Heather) went in search of at least one more person to play. The issue may have been that the title was Auschwitz, the description was that you played either prisoners trying to escape or Russian soldiers trying to liberate the camp. The premise was that the Germans had left seven days prior, taking most of the prisoners with them. I was playing Sandor, a fourteen year old boy who is among the group left to scavenge what little there was. Also, ever since the Germans had left, people have been disappearing. That is when the second player showed up! 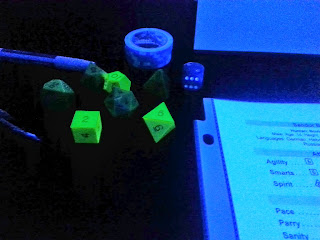 She decided to play a Russian soldier, ready to liberate us poor unfortunates. The prisoners and soldiers met at the gate which, like the rest of the fence, is electrified. The soldiers went to shut the electricity off, and that is when everything went crazy. Partway through fights with two headed wolves and Nazi occult stuff, we picked up a third player, who played another prisoner. So much fun, though it was a bit tense since we were dealing with an actual historical place/event that was horrible. The gm did her homework, the pregens were based on people who were at the camp, she had a map of the camp layout, as well as pictures of prisoners.

All in all, a good first day of the con. Unfortunately I cannot remember the other players names, but here is a picture of them. Take care, and I will be back later.

Labels: Con on the Cob, Realms of Cthulhu, Rogue Cthulhu