Today I went to the Grandview Theater for their Doctor Who 50th Anniversary, and man it was awesome!! Starting at eleven this morning we were subjected to trivia, parody videos, and the main event-Day of the Doctor Who!! They played the very first episode, An Unearthly Child, and everyone enjoyed it so much, laughing and cheering at Hartnell's performance. The concession stand was selling jammie dodgers and jelly babies, so we were well stocked in that regard. The Night of the Doctor was played, as well as Last Day and stuff like the Doctor Games (parody mash up of Doctor Who and Hunger Games) It was just so fun and comforting knowing that at that moment all over the world, there were dare I say millions of fans getting together in homes and theaters to celebrate our favorite show. Tremendous stuff, and Andrew Raymond and Doctor Who Columbus are to be commended for getting this together. In addition to all of that, there was a local improve group, the Wayward Saints, performing there. 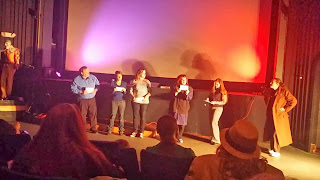 Enjoy this pic because because I do not have a proper camera, so any pic I took was rubbish.
If you are in the central Ohio area please consider joining Doctor Who Columbus as they are fabulous, just saying. Take care, and I hope you all enjoy the special as much as I did!
Posted by Jim Yoder at 12:35 AM