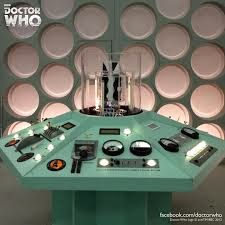 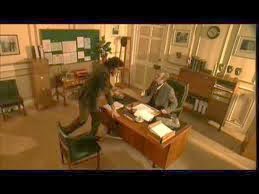 So looking forward to Adventure in Space and Time (written by Mark Gatiss), but we have a slight peek at it from the extras off the Doctor Who: the Beginnings dvd. Part of the extras include four film shorts, two of which deal with the beginnings of the program, and all of which have the illustrious Mr. Gatiss in them. First we have Pitch of Fear which parodies the concept origin of the series. It has Sidney seeing a Mr. Borusa to pitch his idea for a new sci-fi programme. Very funny, I especially like the nod to the theme song at the towards the end. 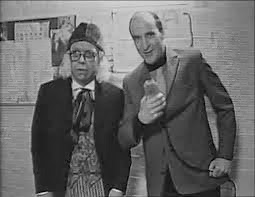 Next is The Corridor Sketch where fun gets poked at the filming the first episode of the show.We have a television reporter giving us a behind the scenes look at this new show, with people dressed as cavemen walking down the hallway as the lead actor mistakenly says it hospital drama. The writer straightens him out and when we next see him, he describes it as "James Bond in space". It just gets goofier from their, ending with a cameo from Nicholas Courtney!If you do not have the Doctor Who: Beginning dvd, you can always look them up on You Tube. Give it a look, lots of fun!

Labels: Adventures in Space and Time, Doctor Who, Mark Gatiss, Pitch of Fear, The Corridor Sketch