So, with finances being crap and my recent time without internet I have started visiting the library recently. My last trip led me to this amazing book from 2012 by Sean Howe, Marvel Comics, the Untold Story. If you have any interest in comics (industry or otherwise), maybe just creative types in general then this is for you. It strikes me how similar some of the stories are to the gaming industry, especially the doomsayers that seem to come out when changes happen. The author manages to be somewhat objective, surprisingly difficult when it comes to Jim Shooter's time there. Initially I had a hard time understanding why people would burn their boss in effigy, I had heard the story before I had read the book, but after reading that section *hoo boy* it sounded intense.

The back and forth between Stan Lee and Jack Kirby is a bit sad, especially since they seemed to start off so well. There is a story about Kirby being a telephone guest on a New York radio station for the event of his seventieth birthday. Stan called the station to wish him a happy birthday, praise his artwork, and basically reminisce for about ten minutes before saying "I'll say this: every word of dialogue in those scripts was mine." A little grumbling back a forth and then Stan says goodbye, leaving Kirby and the co-host flustered "Uh... you can understand now, what it was really like back then."

The part that I really love is how and where these guys were getting their ideas. If someone were to write a book like this for DC or to focus on the history of X-Men or Spider-Man, I would be all over that! So give it a look and let me know what you all think! 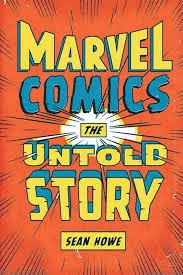