Tim Snider makes some fantastic stuff for Mutant Future, and now Cryptworld. In addition to helping bring the rules set to the masses, as well as Monsters Macabre, he has a zine for Cryptworld. What Tim has done is take a classic horror comic from the 50's, reprinted it in the first half of the zine then turned it into a scenario in the second. He gives the cryptmaster the story background (basically what is going on) and then how to run the scenario with different ways you can get the pc's involved. The main creature gets statted up, as well as a lesser critter that appears in the comic. 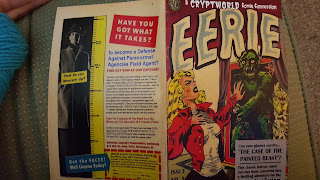 Look at that back cover, a Defense Against Paranormal Agencies advert. Just like in the olden days! 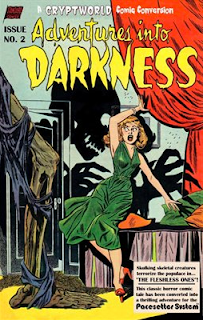 Here is the cover to the second issue, The Fleshless Ones looks to be even more amazing than the first. Tim hopes to have this ready sometime in the near future and I can't wait. Woot!
Posted by Jim Yoder at 10:02 PM