I have been playing Destiny 2 a bit and it had me thinking how I would translate it into a sword and planet setting for 5E? Which reminds me of the fantastic work that Tim Callahan and company did on the Crawljammer (old link but has info on the various issues)fanzine for DCC! They started with just enough information on the planets to get you excited and slowly expanded from there with six issues in all and a couple standalone adventures. If this seems up your alley you can purchase them here!
Of course I want to do my own thing, because why check a copy of something awesome when you can get the amazing original. So if I does this it will be with the intent to bring a different spin to it, while giving credit to all those before me. This includes Edgar Rice Burroughs and Clark Ashton Smith. I am looking into running games using virtual table tops to see if any of this works, which of course I will announce new here. So keep an eye out and hopefully you will be entertained or at least find something useful. Take care, folks!
Posted by Jim Yoder at 12:13 AM No comments:

Finally I have relented and will be purchasing the main three books for D&D 5E. I have several friends who are playing, so I might as well take the plunge. My only hesitation was that i already had access to rules sets that accomplished the same thing, Labyrinth Lord for BX play (actually I also have a copy of Rules Cyclopedia) and Dungeon Crawl Classics if I want to go a bit gonzo with my fantasy. 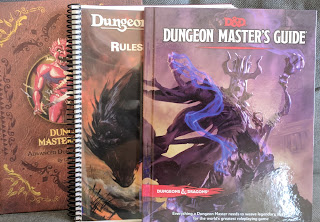 The final straw was a friend of mine from back in Ohio thought I was already playing it and he hoped I could direct him to web sites and such. I had to break it to him that I could not help, and then I gave in to temptation. Yeah, it doesn't take much, some days. I started with the DMG and it will be another week before I get the next one (PHB) but I am hoping to start finding some good online resources. Anyone have any tips where to look, good blogs maybe?

The extra cool thing about this is that I should be able to adapt my old school D&D as well as the more recent retro stuff I have acquired. Maybe Dwimmermount or some stuff from Lamentations of the Flame Princess, perhaps? I could reach back to Veiled Society (B6) or The Lost City (B4), just the notion is getting me ahead of myself.

So yeah, if anyone out there has anything they would like to share, feel free. Later guys!
Posted by Jim Yoder at 2:04 PM No comments: