My Doctor Who Campaign, part 2 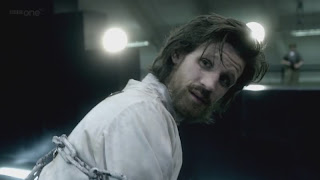 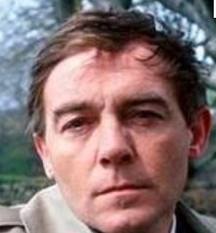 We left off with the characters rescuing the Doctor,who the Lord President has kept locked in a stasis cell, torturing him and occasionally forcing him to regenerate. Helping him out of the cell, he regenerates, leaving him very weak.They take him back to their dorm and do an analysis to see who he is, with a little help from the APC net they discover his identity. Something is not quite right, and the matrix (they hacked in) seems to imply he was stopped before he could go out into the universe. With that revelation, the Lord President arrives!

Wearing black robes of office, he retrieves the Doctor and the pc's, bringing them back to his quarters. As they enter, the Doctor becomes weak kneed and stumbles into the President, who shoves him away. Stepping behind his desk, the Lord President lets them know he was once known as the Master, and the Doctor's capture was just the first in a line of victories, culminating with control of Gallifrey and ultimately the universe!

"Not so fast, old friend," croaks the Doctor as he pulled himself to his full height and fixed the President with a steely glare, "you will never be my master!" A gun had suddenly appeared in his hand and he shot the Master, then turned to the pc's wondering if he should kill them. They point out that they rescued him, so he decides to not kill them right away, and shoots one of them in the leg.

Stumbling out of the room, they close the door and jam the lock as the ominous sound of a cloister bell begins warns the citizens of the capitol of imminent danger.

That is where I will leave it for now, I will be back later.

Labels: Doctor Who: Adventures in Time and Space

My Doctor Who Campaign

So, recently I began running a DW:AiTaS game for a few of my friends. I started the initial three on Gallifrey in a universe where the Doctor does not exist. On the eve of their graduation from the Prydonian academy, they began investigating the fact that they each had been having the same dream. In the dream, a man sits, strapped to a chair with a metal hood covering his head. A voice screams "Help me!" before they awake. Things get rolling with figuring out what the strange figure was secured to, a little poking around reveals it is a stasis cell. Could someone be trapped in one, calling for help? Well seeing as how these things run off Kontron energy, setting up a scan of the capitol for thing energy signature should not be an issue.

Off they go, location in hand, to see what is going on. After dodging guards, they reach their destination to find it is the Lord President's quarters. After working the lock they find themselves opening the stasis cell (it was disguised as part of a wall) to find someone who calls himself Doctor.

Unfortunately I am out of time, but I will post more later on.
Posted by Jim Yoder at 2:28 PM No comments: