Thinking of possible offerings for my Patreon. Ultimately, I would like to take certain npc's and link them, like a little setting. There will be maps, adventure hooks, and more art of course! This would mean that like genres will be brought together, but I would try to cross things over when possible. You know, because magic/time travel. That is all in the future, and if anyone has any suggestions, all input is welcome.
This is just the start of what I hope will be a career. I am working on NPC Diversity, and next I will be setting up a section of my site for taking commissions. I cannot do it without support from you guys, whether it is monetary or with feedback, having a solid following is key. If you are in a position to share my blog, website, patreon, or all three then please go for it.

I've got my coffee

Here we are, just getting started on this Wednesday. The big move meant a purge of all manner of items I did not need, or could replace. The easy stuff was old posters, notes for games long gone(alright, that last one was a little tough at times) and music/movies. Then there was the books and games. Oh some were easy, as in will I ever play or use this for inspiration. Star Frontiers and Gamma World got donated to a nearby libraries game section. Just stop for a moment, a library had a game section, and it is in active use thanks to the dedication of Jason Paul McCartan of Infinibadger Press. That made it easier to part with those, knowing they would be used by the next generation of gamers. Hmm, I may need to interview Mr McCartan in the near future. Actually, I have started to forget what the rest was, it seemed so long ago.

So, on to Jacksonville! Apparently known to be a Pathfinder town, which I have nothing against it just puts it in the category of games I would rather play than run. Also, I am not in the market to purchase a new game book, as hard to believe as that sounds. There is a Savage Worlds group here, which gives me hope that I may not be required to do all of the heavy lifting. I might be able to convince folks to try Call of Cthulhu, Cryptworld, Dungeon Crawl Classics, and various retroclones. 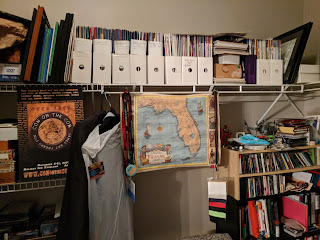 My little art studio/closet has most of my game library, and below is my bedside bookcase where I have put my Savage Worlds and Goblinoid Games stuff. 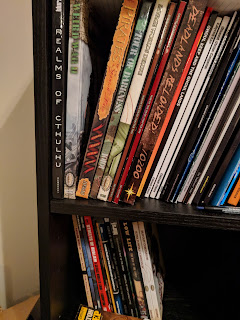 Anyone here, or around Jacksonville just let me know. It would be cool if anyone reading this was local to me. Take care and great gaming
Posted by Jim Yoder at 10:47 AM No comments:

"Just when I thought I was out, they pulled me back in." Al Pacino

I thought I had given up on this blog when fate changed everything for me. I currently have a web site for my art, and a passion to develop my art and get it out into the world. To have it seen by whomever cares to see it. I was not sure I had time to blog about games. Then came my big move, from Ohio to Florida, and I took a chance on finding a good job down here. Then I made a decision, to give Patreon a try, and last night I launched NPC Diversity!

The main focus of my Patreon is to get my art out there. So twice a month I will release an npc that I have illustrated, either as a thumbnail portrait or the full depiction. Both will have a description of their character, along with; occupation, age, and which genre(s) the individual would fit best in. The first one will always be suitable for fantasy role-play, the second may be for any genre. I will not be including stats, to avoid being attached to a single rules set, though I may be convinced otherwise. This is just the beginning, and I hope many of you come with me on this adventure. Who knows where we will end up!
Posted by Jim Yoder at 9:34 PM No comments: