Saturday's game did not get the turn out I wanted, in fact I had only two people, but it turned into a lot of fun. I had my pre gens set up using Wayne Snyder's gang occupation table and each player started with three each. The adventure came from the first issue of Metal Gods of Ur-Hadad, wherein you roll upon some tables to generate your various neighborhoods and the gangs that dwell within. The players run a few characters apiece (it is a zero level funnel) who are members of a street gang that find themselves far from their home turf as night begins to fall. It is like a fantasy version of the Warriors from the 80's. They had to deal with rival gangs, the Grand Vizier's anti-gang squad, and a trickster god pranking them. 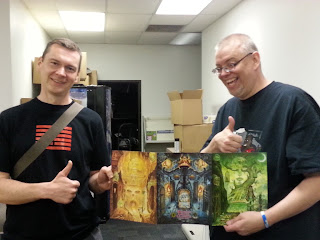 Since I only had the two players I ran it cooperatively, letting them decide what the results of some of their rolls. They avoided fights and did a lot of running, which in the end saved their characters. Which is a change from last year's Blood Drinking Box where everyone died. That was about survival, this was about ducking guards and rival gangs using crowded streets and cheezy one-liners. As long as I have someone show up, I consider it a success. Next year will be epic!
Posted by Jim Yoder at 12:22 AM